Jake Is In Pain After Eating

March 12, 2019
Jake was a happy, healthy boy. But then, after a meal, he was apparently in distress and pain. 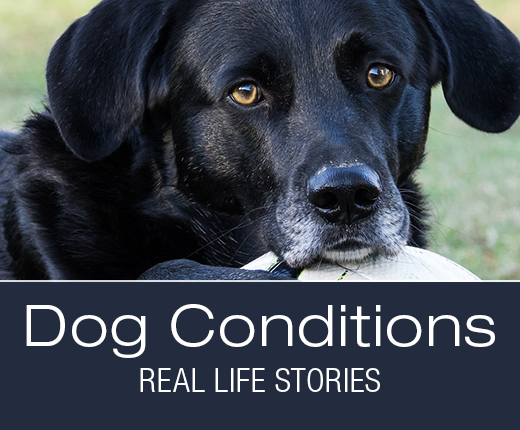 After he ate, Jake was pacing around, crying, looking miserable, repeatedly asking to go outside.

Because Jake is a big boy, bloat was the first main concern.


Even though Jake wasn't trying to vomit, all other signs looked very scary. Bloat is a dire emergency and ruling that out or getting Jake treated was the highest priority.

Fortunately for Jake, bloat was ruled out.


The veterinarian couldn't find any obvious reason for Jake's discomfort and concluded Jake just had an upset stomach and sent him home with probiotics.

But Jake's trouble has not improved. Every time, after a meal, no matter how slowly he ate it, Jake was exhibiting the same distress.

Jake's food was the same he's always eaten. Because this became a regular thing, it was not likely he would have gotten into something he shouldn't daily.

Every time after he ate, Jake would cry in pain.


At the same time, Jake was constantly hungry, looking for food.

Slowing down his eating didn't make a difference. Giving him two smaller meals instead of one large one didn't help.

Right after he'd finish eating, Jake would keep asking to go outside, pace around and cry. This lasts for about a couple of hours, and then it passes, and Jake settles down.

What is going on?


This went on without change and without answers for two weeks. Then something changed. A change, any change, can sometimes be the missing clue to a diagnosis.

About an hour after his dinner, Jake threw up the entire lot. But it didn't look like vomit, it looked like a sausage of everything Jake ate earlier.

Jake's mom went to investigate the yard and found two more sausages just like that one.

Jake wasn't vomiting, he was regurgitating.


None of the food he ate ever reached his stomach. Jake's veterinarian confirmed that the food isn't making its way into Jake's stomach and becomes lodged in his throat instead.

Jake was diagnosed with megaesophagus.


Megaesophagus is often a congenital issue, but adult dogs can acquire this problem. The causes are not well understood but some things that can cause it can be neurological, foreign bodies, tumors, severe inflammation of the esophagus, toxins and hormonal imbalances.

Sometimes the underlying cause can be determined and sometimes not. Some of the tests Jake might need to get is endoscopy, tests for nerve-muscle connection, nerve-muscle biopsy, spinal tap, and one for myasthenia gravis.

Would determining the cause help?


It might but, sadly, it is not overly likely. The most important part of treatment is the management of symptoms, helping the food get down into the stomach, and preventing aspiration pneumonia.

Let's keep Jake in our thoughts.

Related articles:
Vomiting in Dogs: Is It Actually Vomiting?
Regurgitation