Symptoms To Watch For In Your Dog: Regurgitation

Regurgitation is not vomiting. 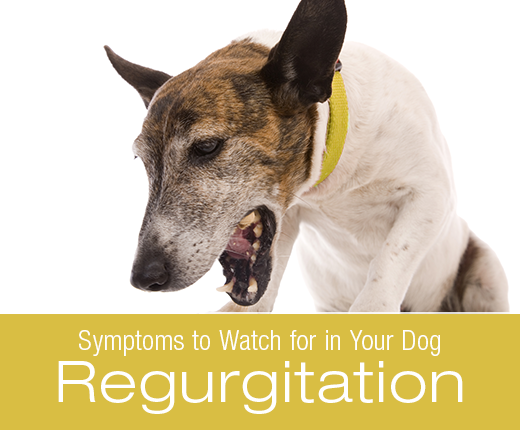 What is the difference between the two and why does it matter?


Vomiting is the forceful expulsion of stomach contents. A dog will be nauseous—they might drool or lick their lips right before they throw up. You will typically see dogs heaving as they vomit.

Regurgitation refers to a more passive process and involves the expulsion of the contents of the esophagus.

No heaving is involved.


Jasmine vomited plenty of times but regurgitated only once or twice. There was a distinct difference. When she regurgitated, it was almost immediately after she finished her meal and it came out the same as it went down (well, in kind of a sausage shape). She basically just opened her mouth, and there it came.

When she vomited, it was always preceded and accompanied by the well-known heaving sound, followed by my mad dash to open the door to let her out. She always tried to take it outside, so it was up to me whether or not I made it there on time.

Presence of bile (a yellowish-brown tinged fluid) means that what you’re looking at is vomit.

But not all vomit contains bile. Every now and then JD would overdo it at the farm munching on horse poop and grass. What he would vomit the next morning looked almost like poop. You could clearly see what he feasted on the previous day, and there was no bile in it at all. There was a lot of heaving, though.

Why would a dog regurgitate?


The most common causes of regurgitation are partial or complete obstruction of the esophagus or an esophageal motility issue.

An obstruction can be caused by a foreign body, stricture (narrowing), vascular abnormality (blood vessels that form a tight ring around the esophagus) or a tumor.

Problems with motility can be caused by inflammation, Addison’s disease, neuromuscular disorder or toxins. Megaesophagus – a disorder with several, potential underlying causes – is a common cause of regurgitation in dogs.

Megaesophagus is a disorder of the esophagus.


In health, the esophagus is a muscular tube that expands and contracts to move food and water from the mouth to the stomach. With megaesophagus, this tube is dilated and flabby, causing it to malfunction. Food and water do not make its way into the stomach but builds up within the esophagus and eventually is expelled back out.

Frequent regurgitation puts your dog at risk of developing aspiration pneumonia, which happens when food is accidentally inhaled into the lungs.

Regurgitation can also be one of the symptoms of gastroesophageal reflux (GERD).


This condition is characterized by the reverse flow of gastric or intestinal fluids into the esophagus. You might be looking at inflammatory bowel disease (IBD), chronic pancreatitis, infections, parasites, liver problems … basically, anything that causes prolonged vomiting… as well as hiatal hernias (movement of abdominal contents through the diaphragm around the esophagus) and anesthetic procedures during which dogs are positioned on their backs for long periods of time.

The causes of regurgitation are quite different from those behind vomiting.


Treatment then will be very different also. As always, proper diagnosis is the starting point.

Related articles:
Vomiting in Dogs: Is He Actually Vomiting?
What’s In the Vomit?
Vomiting Versus Regurgitation
Why Examine Your Dog's Vomit?