February 05, 2012
Preventing mishaps after a surgery, while allowing the legs to do some work, can be a challenge. Particularly if both knees had been operated on simultaneously. 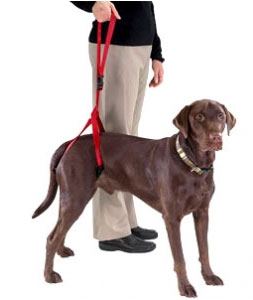 It is important that the legs do get used but as safely as possible.

The main challenges are stairs and slippery surfaces. (By stairs I mean the couple of steps to get in and out of the house to potty, flights of stairs should be avoided altogether)

The traditional way of supporting the rear end was so called towel-walking. You make an improvised sling by running a towel under your dog's belly. It works. But I find it quite awkward to use as well as to keep it where it belongs.

Some people get creative and design their own slings.

If you're not that creative, you might want something that is ready to go.

A product I like is Bottom's Up Leash. It supports the rear end at just the right place. I have not tried it myself. But after our experiences with knee surgeries and towel-walking, it would be something I'd consider if my dog needed rear end support, whether because of surgery, injury or other orthopedic issues.

Unlike a towel, Bottom's Up Leash also allows your dog to be supported while eliminating.

Depending on your dog's situation, that can make a big difference, trust me.

You might find other similar products out there. Either way, great idea for rear end support.
It's your dog's health,
Jana

Related articles:
Compensation: An Attempt To Restore Harmony
How The Oddysey Started: Jasmine's ACL Injury
Talk To Me About ACL Injuries
ACL Injuries in Dogs: Non-Surgical Alternatives?
ACL Injuries in Dogs and Stem Cell Regenerative Therapy
Newest Surgery For Ruptured ACL In Dogs
Preventing ACL Injuries In Dogs
ACL Injuries In Dogs: Xena's Story
ACL Injury Conservative Management: Sandy's Story
Surviving The Post-Op: After Your Dog's ACL Surgery
Talk to Me About Arthritis
Don't Forget the Physical Therapy
My Love Is Sleeping At My Feet: ACL Surgery Complications
Coco's TPLO Post-Op Diary
Small Breeds Can Hurt Their ACL Too: Star's Naughty Knee
One Thing Leads To Another: Why The Second ACL Often Goes Too
ACL/CCL Injuries In Dogs: Is There Such a Thing As A False Positive Drawer Sign?
Dog Knee Injuries: Should You Say Yes To Pain Management?