Small Breeds Can Hurt Their ACL Too: Star's Naughty Knee

October 30, 2010
Star's story is shared with us by Julie Hill, host of DogCast Radio. Julie Hill lives in rural Shropshire, UK, with her husband, daughter and dogs Labrador Buddy and Bichon Frise Star. She hosts DogCastRadio.com and writes for various magazines.

DogCast Radio  is a podcast about dogs featuring breed profiles, training advice, author interviews, news and original fiction. You can listen online, download it for your MP3 player, or subscribe to it as a Podcast.


ACL injuries are commonly seen in large breed dogs, but small breeds seem to be affected at increasing rate also.
Makes me stop and wonder how that might relate to how we're breeding and what we're feeding our dogs, among other things. 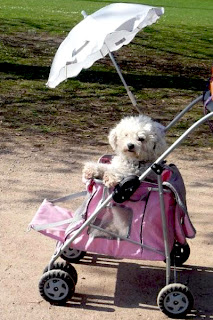 When my daughter Jenny’s three year old Bichon Frise, Star, went completely lame on her back left leg I had no idea the effect it would have on the whole family. We inspected  her and could find nothing wrong, she gave no sign of being in pain but held the leg out to the side and ran on the other three legs.


By the next morning she was still not using the leg, so it was off to the veterinarian, who ordered an x-ray the following day which revealed the cruciate ligament was ruptured.

Editor's note: Dogs do not exhibit pain the same way we do, with a lot of groaning and moaning and crying. They will hide pain the best they can. Favoring a limb or not using it at all is in fact a sign of pain. See A Word on Pain article. It was a great decision to have Star checked out by the vet right away. Often ACL injuries go untreated for quite a long time which contributes to more arthritis in the joint.

It was a real shock as she was such a young dog, and we were all thrown into turmoil at the thought of one of our dogs having to undergo surgery. For me it was doubly hard as I was struggling to cope with my own emotions for Star and at the same time support Jenny through her worries. Many tears were shed.

When we saw the surgeon I do wish he had started with something reassuring.

Instead he impressed upon us how Star’s knee would never be the same and that we would have to follow his instructions scrupulously in order for her to recover.

I was confused, as it seemed that he was telling me Star would never run again, but eventually through the fog of medical terms and dire warnings it emerged that he was recommending we chose a TPLO for Star. This is an operation which levels the top of the shin bone to help the thigh bone balance on top of it without the aid of the ligament, which we now knew was gone forever.

It sounded a horrific operation – cutting into the shin bone to level it – and had an eight week recovery time.

However, taking everything into account it was her best option.

The day of her surgery was a tense time but eventually it was time to pick her up. Although our veterinarian was very careful to dose her with painkiller and send several doses home with her, Star was in a very sorry state. 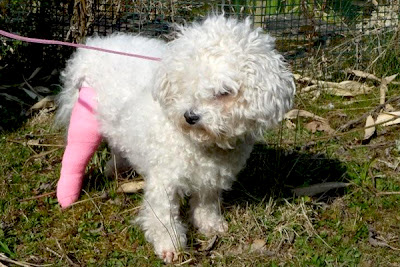 The operation took place on Thursday and it was the early hours of Saturday before she urinated, and another twenty four hours before she pooped; both procedures which we had hitherto taken for granted but which were suddenly huge milestones! By that point she was also choosing to drink water too – another huge relief.

Having read around on the internet I hoped that post-op Star would use her leg straight away, but she still held it to the side and walked on three legs.

After about a week she would put the foot to the floor when she stood still to help balance. Gradually, she started to use the leg again, but it obviously felt strange to her as she frequently stretched it out behind her. 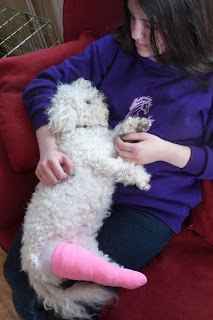 In the first week she was only allowed out of her crate for toilet breaks, but after that we were told to gently increase the exercise so that by the end of the eight weeks she would be walking fifteen minutes twice a day. We inquired about hydro-therapy, which would have been covered by our insurance, but was told it would not help with TPLO recovery.


Editor's Note: Hydrotherapy is often used as part of the post-op rehabilitation. It greatly improves muscle strength and range of motion while providing safe low-impact exercise. Physical therapy plays an important role in rehabilitation from surgery.

For ten days Star refused dog food, instead eating tiny portions of chicken breast, jacket potato and a variety of vegetables. Her return to a normal diet was cause for another celebration.


On the Saturday following the operation her bandage was removed, and her poor little shaved leg resembled nothing so much as a chicken drumstick. Her wound looked incredibly raw initially and she hated having to wear a Buster collar to stop her from trying to lick -  and bite - it better.

Gradually she improved, but I did worry that she must hate being confined in a crate for most of the day.


Finally the date of the last check-up came and we were excited to think it was nearly all over.
Although I had noticed she still stretched the leg behind her a lot, and occasionally picked it up only using three legs when she ran, it was still a shock to be informed that she might also have a wobbly kneecap (luxating patella) which would require further surgery.

That was not we had hoped for or expected!

The surgeon advised us to spend a month increasing the length of her walks which should build muscle in the leg and stabilise the joint. Thankfully at the end of a month she was walking normally and declared fit by the surgeon.

It’s now six months after the operation and Star is back to normal – you couldn’t tell there has ever been a problem with the leg. For a while one tiny little knee joint had our whole family in a spin, but thank goodness now we are all happy and healthy again.