September 10, 2010
Coco's TPLO story is shared with us by @trailerparkdogs. Coco and Goose are badass dudes who luv their anipals. Part-time Doggy D&G for diva dogs and band members of da Shibbering Cheetos @ShibberingC. Those guys rock!

To read more about ACL injuries and TPLO surgery option check out Talk To Me About ACL Injuries article. 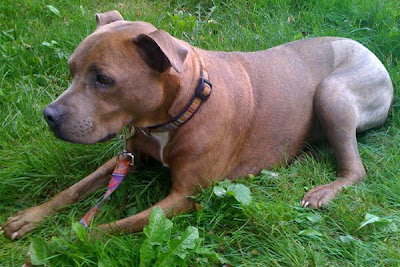 It finally happened. Coco, my 6-yr old part boxer/bull terrier, tore his cruciate ligament on his left knee chasing squirrels in the backyard. The ACL injury, I believed, was also prompted by the wear and tear of his knees from his obsessive running and diving into a pond on a daily basis. He would do that for a whole hour non-stop, run along the bank and dive into the water, swim 2-3 lapses, run around and dive in again.

Surgery was inevitable. So why wait? He was seen by the family vet immediately, who helped schedule a consult with a surgeon that same week. The earlier the surgery is done, the sooner the recovery can start! It is going to be a long road to recovery.

Coco is young and in great shape, the surgery, though invasive, went very well. He was awake shortly after and I was told that he was standing and being walked in the afternoon. He came home the next day, alert, but dazed by the medications. He was sent home with Rimadyl and Tramadol for pain, and of course, antibiotics.

Editor's note: NSAIDs, such are Rimadyl, are often prescribed for injuries or post-op recovery. While many dogs benefit from these drugs, they can have serious side effects. I advise caution and monitoring your dog closely for any suspicious signs, particularly any changes in drinking and eating habits. When in doubt, discussing alternatives with your surgeon might be a good idea. 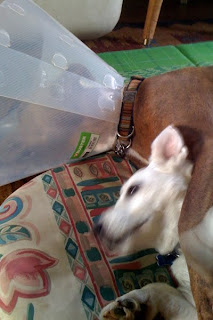 Coco was not too happy with the lampshade that he had to wear. He was offered food in the hospital but refused, so it was important that he ate at home. And eat he did! He just didn't like hospital food.

He flunked the LampShade Test on Day 1. Coco was a licker, as soon as the LS was off, he went for the stitches, so back on it went, and on it stayed for the next 2 weeks until the stitches were removed.

Editor's note: It is important that your dog does not lick the incision. Twenty minutes of licking can undo two days of healing! However, I don't blame the poor dogs for hating the "lampshade"! There are some alternative products out there now, such as the ProCollar, that are worth considering.

The incision was about 2 in. long in the inner side of his left knee. It looked puffy and red, and fluid gathered just below around the ankle. Nevertheless, the boy limped around like a trooper. Oblivion is bliss! I was glad to see that he actually used that leg gently, instead of hopping on 3 legs. You would want your dog to use that leg right away.

I put ice pack on the knee for a few minutes 3, 4 times a day. He didn't like it that much but it helped to get the swelling down. Nothing drastic happened but it didn't hurt either. I also massaged the whole leg gently everyday, and worked on his Passive Range of Motion (PROM) by moving his leg for him as shown to me by the vet tech. Coco was very good and didn't complain about it.

He was kept in the living room with doggy bed and comforters on the floor, separated from my other 2 dogs. They had supervised visits, but rough play was not allowed.  The couch cushions were all lifted up so there would be no risk of jumping on and off. Daily 5-10 min. potty breaks on short leash. That's pretty much the routine for the first 2 weeks.


TIP At this point, I would add in a tip for dog owners. Take a week (or 2) off as vacation, you'll need it. It lessens the stress off your mind worrying about the care of your dog, trust me on that. Face it, when your dog tears a cruciate ligament, you are screwed!

TIP Rawhide chew bones, kong toys etc. are useful to keep the dog entertained while he cannot have any real physical activities. Coco chewed up a brand new doggy bed because he was bored.

TIP If your dog loves car rides, your car can serve as a very good and effective crate to confine his movement. Coco can sleep in the back of my SUV in the garage for hours, and often refuses to come out. (Only in ideal weather, of course.) 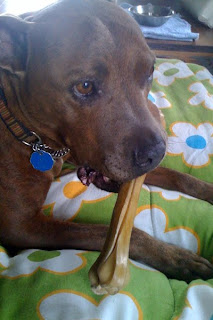 Two weeks after surgery, Coco went back to have his stitches removed. He had been using his leg to scratch his chest, itching due to allergy, I was very worried that he might hurt the healing process, but the surgeon took a quick look and ensured me that it was fine.

That same day, Coco met with the Canine Rehabilitation Therapist in the same hospital facility. The consultation was included in the surgical procedure, a wonderful idea. The therapist said Coco was progressing very well on his own, and did not need special exercises other than the routine ones to further promote muscle strength, which was the ultimate goal of rehab. She suggested an easy workout routine: sit and up, sit and up. It is like doing squads.

Coco was also given a trial run on the hydrotherapy treadmill. He was terrified at first because he didn't know how it worked. I decided to enroll him in several sessions to speed up his rehab. I was told all dogs were scared until they figured out how it worked. Anyway, Coco does very well now trotting along, starting for 10 mins, then 15, then 20, each session (pic). He now knows what to do, but he gets frustrated for not being able to go anywhere, he would start biting the foam noodles or taking it out on the pool toys. Silly Coco!


TIP Sign up for some rehab sessions if possible. It really is beneficial to rebuilding the body after surgery.

Well, it's been over a month now since surgery. Coco is walking, trotting, even lunging, as if nothing had happened, except he is always on a leash outdoor and is not allowed to take off. It is beneficial to walk him uphill for exercise at this stage, where he is forced to use both hind legs to push forward. Stairs are also a good rehab tool, providing that he walks up slowly.

Some observations of his leg at this point: When he stands, he tends to ease on the leg, not putting 100% pressure on it. It might tremble at times. And he will limb after a long workout on the treadmill, or a long walk. I believe it gets sore. It is all part of recovery. I make sure I have some Rimadyl at hands in case he needs to ease the pain.

He will have a check up with the surgeon 4 weeks from now, at which point, if everything looks fine, he will be allowed to go off leash in the yard, but somehow has to be restrained from chasing squirrels. I am not sure what to do about that yet!

I am happy that Coco is recovering so well and I will keep you posted on future progress.

Update on Coco
October 8, 2010
Sadly, as it often happens, Coco's other ACL failed too and Coco had the second surgery on Wednesday and is now recovering at home.