Sandy's conservative management for her ACL injury had to be abandoned. While the brace was helping with her knee, it was causing problems with her ankle. The decision has been made and Sandy had her extracapsular surgery on Thursday.

Despite Luanne's worries, the surgery went well and Sandy is now at home recovering. Sadly, it was discovered that Sandy's meniscus suffered substantial damage and a large portion had to be removed. This damage didn't seem apparent back in December and it is possible that the meniscus got damaged since. 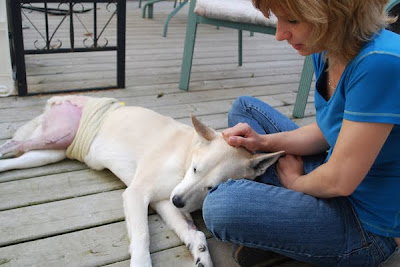 A joint that is not stable is also more vulnerable to arthritis. The possibility of further joint damage is something that you need to consider when making a decision about your treatment options. I do know dogs that did well with conservative management, but this was not in Sandy's cards.

The good news is that the surgery is now done and Sandy is on her way to getting her life back. I will be following her post-op here. Let's keep Luanne and Sandy in our thoughts.

Meanwhile, a note on extracapsular repair.

It is very likely that if your dog injured his ACL you will be presented with TPLO (or TTA in some cases) as the only viable options, particularly for a large breed dog. If you do some online research, the information you'll find will only confirm that.

I even talked to an owner who felt terrible for choosing extracapsular repair because all she could find were expert opinions preaching against it. A setback caused by an unfortunate slip on ice made her question her decision. Setbacks can happen with any type of surgery. The more you learn about your treatment options beforehand, the more confident you can be about your choice.

Extracapsular repair is an older type of ACL surgery and it is now often presented as inferior. We opted for this type of surgery for our Jasmine because it is the least invasive and because we believed that it has a good chance to be successful. We are now over a year post surgery and Jasmine's legs have full function and are as good as new.

Our vet has been successfully using it for many years for both small and large breed dogs. Coincidentally I was also talking to another veterinarian recently who also believes that once healed, there is no difference between the two.

So if the results are the same, why is TPLO often presented as the only right option?

There can be a number of reasons, one of them being that the residents at teaching hospitals have to perform a certain number of TPLO procedures to graduate. Then, after their graduation, the TPLO is the surgery they are most comfortable doing.

It seems that the TPLO might be more forgiving during the post-op. On the other hand though, if there are TPLO postoperative complications, they can be much more serious.

Often it is simply a question of preference. You do want your surgeon to be experienced and comfortable with the type of surgery he's going to perform on your dog. But you don't want to limit your options.

There were some more anecdotal reasons that came up during our discussion, quite likely also true, but I am not going to go there.

Getting familiar with all your ACL injury treatment options will help you to make the choice that is best for you and your dog.

This policy doesn't apply only to ACL injuries, but for any health issues, you and your dog might be facing. Always know and understand your options!

Did conservative management work for your dog? Do you have an ACL injury story to share?