Sandy is a 11-year-old Lab cross, a lovely girl who is full of life and full of beans. Her left ACL failed two years ago and was treated with an extracapsular repair.

Quite often, particularly in older dogs, a ruptured ACL is a result of a gradual weakening of the ligament. Having the other ACL fail is just a question of time. That is what happened to Sandy. 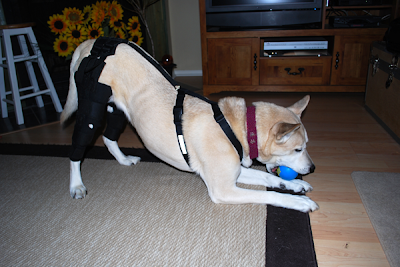 While the extracapsular repair went well, and in spite of a post-op setback, Sandy has full use of her left leg. However, there are reasons why Luanne decided to opt for a non-surgical solution this time. She recently lost one of her dogs on an operating table and is leery of putting Sandy under anesthesia. I can surely relate to that! Statistics mean very little when you lose your dog.

It also turned out that Sandy cannot tolerate NSAIDs—she developed a bleeding ulcer after only 3 days of the treatment!

NSAIDs can be effective for managing inflammation and pain, but I frequently see cases where dogs have a bad reaction to the drugs. More frequently than overall statistics would suggest. After our own experience and those I witnessed, I really recommend considering other options first. Measure twice, medicate once! (Anybody out there who had a positive experience with NSAID treatment? Let me hear from you!)

We also seriously considered non-surgical options for our Jasmine and did a lot of research. Eventually, we decided to go with a combination of extracapsular repair and stem cell therapy. Because of Jasmine's age and activity level we felt that surgical repair was the best choice for her. We couldn't be more pleased with the result!

For some dogs, conservative management is the way to go. The important thing with ACL injuries is to stabilize the knee long enough so scar tissue can develop to replace the function of the ligament. As long as the knee is kept stable, whether, by means of surgical stabilization, a brace or truly controlled exercise, the final result should be the same.

The rehab management is quite similar to both surgical repair and conservative management. Restricted exercise and short controlled leashed walks … every dog's dream (not)! But it needs to be done in order for them to be able to get back to their lives.

Sandy was fitted with a bilateral knee brace made by Canadian Animal Rehab. The brace provides external joint stabilization and takes over the function of the surgical repair. Sandy was wearing her brace for her walks. The brace would likely not survive being left alone with Sandy. Unfortunately, this led to a number of setbacks, which might not have happened if the brace was on.

We were considering a different type of brace for Jasmine, but during our conversation with the manufacturer we were told that Jasmine would have to wear it at all times until the scar tissue developed, and it was recommended she'd wear it for long hikes even after that. That was one of the reasons we abandoned that option.

Learning from the setbacks, Sandy started wearing her brace all the time she could be supervised. Sandy is full of energy and would take advantage of every chance she had to go wild and do something silly. She is restful and calm at night so she could enjoy comfortable brace-free rest.

The additional protection of the joint seemed to have brought things around and an appointment with her physical therapist was made to assess Sandy's progress.

A thorough examination revealed that Sandy's leg was in good shape, but the knee wasn't as stable as it should have been and some arthritis seemed to have developed. An important decision needed to be made - whether to continue with conservative management or do the surgery after all.

The conservative management was going quite well until a major setback, from which little improvement could be seen. Are better control and movement restriction going to be possible with Sandy?

With that in mind, the extracapsular repair was reconsidered and scheduled. For the second time, Sandy fell ill before the surgery appointment. Would that be a sign not to go through with the surgery?

For now Sandy is back on conservative management. I am hoping things will work out for the poor girl! I will keep you updated on Sandy's progress.

While Sandy's knee seemed to have been improving with the brace on full-time, the brace was causing trouble with Sandy's ankle. This ended up a serious problem and lead to a decision to abandon the conservative management and go with a surgery after all.

Sandy had her extracapsular repair done on Thursday. The surgery went well and Sandy is now at home recovering. I will follow Sandy's post-op in another article.