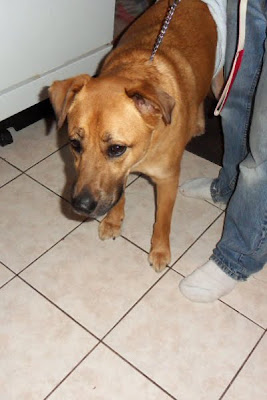 Xena's mom found my blog after an unfortunate slip on ice caused a setback in Xena's post-op recovery from her ACL surgery. She was very worried about her girl and afraid that their decision to go with an extracapsular repair was a bad one.

Our Jasmine had an extracapsular repair on both her knees and she is doing great. The post-op period is very sensitive and a mishap during that time can cause the repair to fail. While some of the newer surgeries, such as TPLO, are a little more forgiving, a trauma such as a slip on ice can bring a major set back as well.

Avoiding setbacks is as important as it is difficult.

Xena's mom agreed to share her story with us for those who might be going through this, as well as for those who were lucky enough not to have heard about ACL injuries at all. Recognizing the symptoms of an ACL injury, early diagnosis and treatment are important. Arthritis develops very quickly in an unstable joint, and then instead of one problem, you have two. 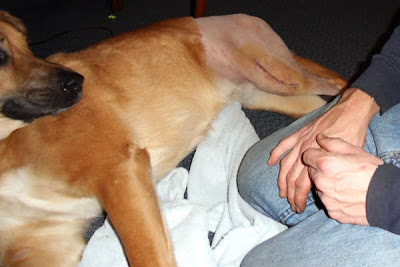 We figure that she first hurt her leg in August of 2009. She was playing with our neighbor's dog, and the next day we noticed she was lifting her leg a bit, reluctant to bear weight on it.

It seemed to have gone away so we didn't think much of it.

During the time between August and December, she would have moments of lifting her leg,  while everything seemed fine the rest of the time.

Finally, in December of 2009, my son called me at work and told me that something was wrong with Xena. When trying to walk she would take a only a few steps and sit down, repeatedly.

We got worried so we immediately made an appointment with her vet for that night. The vet took an x-ray and informed us that Xena had ruptured a crucial ligament in her left knee.

Her vet told us that Xena will need a surgery and gave us two options. We could choose either an extracapsular repair or TPLO. We don't have a lot of money, so we decided to go with the extracapsular repair, which was about $1500 cheaper than the TPLO. The surgery was booked for January 7th 2010.

The day after her surgery we went to get her and she was very happy to see us and was acting as if nothing had ever happened to her. The vet explained how we were to lift her up if we needed to go up or down stairs, and told us that we needed to restrict her movement for at least 3 weeks—she had to be confined wherever we were, had to be on a leash to go to do her business and couldn't run or play at all. This was the hardest part.

She started putting some weight on her leg about 3 days after we brought her home—a little too soon for us—and we had a hard time keeping her occupied and keeping her still.

After the fist few weeks of her post-op there was really no change. After four weeks we took her back to the vet and he told us that she was doing ok, but should be putting more weight on the leg.

Five weeks after the surgery we were beginning to worry because she wasn't really bearing weight on her leg yet. She was lifting her leg when standing still and she was limping a lot when walking.

We were hoping that things would get much better by eighth week. Unfortunately, seven weeks after her surgery, we were taking her outside and she slipped on a bit of ice. She let out a whine and lifted her leg right away.

We called the vet and he told us to come right in. He took a new x-ray and he told us that she stretched her suture. We could either wait and see what happens, or repeat the surgery. Because the stretch was minor and the suture was still holding, he suggested to wait and see how things go.

Those were very hard times for us, worrying that Xena would have to go through the whole ordeal again.

Today we are at week twelve post surgery and Xena seems to be doing ok. She is still favoring the leg but when we take her for a walk it is as if she is a puppy again, even though by the end of the walk she seems a bit more sore and tired.

I am hopeful that after the six months of her post-op is over she will be the way she used to be, though I am worried that she might not. Only time will tell. I'm just hoping that her right leg will hold up, at least until her left one is healed.


As long as the knee remains stable, there is a good chance for a full recovery. Stability of the joint is extremely important. Because the stretch in the suture was minimal there is a good hope that it was just a minor setback. I will update you on Xena's progress.

Let's keep Xena in our thoughts and wish her full recovery.

Xena was showing good gradual progress in her post-op recovery She would still favor the leg when standing, but her gait was looking very good. She wasn't showing as much progress as Jasmine did, but Jasmine had her stem cell treatment together with both of her ACL surgeries and that made a huge difference.

Recently they had a big scare when Xena suddenly became substantially lamer. A thorough exam and new set of x-rays showed that her knee is indeed very stable and scar tissue well developed and the lameness was caused by a muscle injury. This is interesting because we had exactly the same scare with Jasmine.

The fact that the knee is perfectly stable is the most important thing at this point. Only a little bit longer before Xena's post-op should be done!

Xena is doing very well. She can now run and walk with no sign of anything ever being wrong with her knee. She does favor her leg a bit after a long day, but it seems that it gets sore from arthritis that has developed, rather than the injury.

Very glad that Xena has her life back!