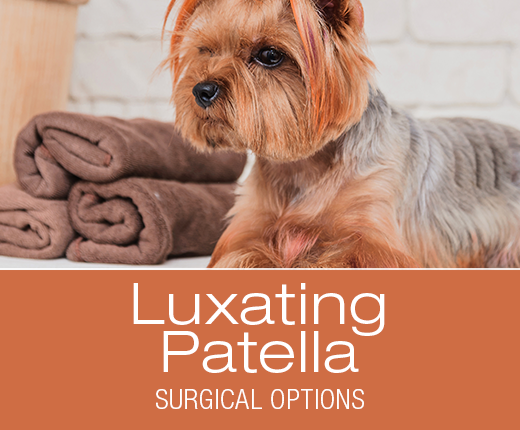 In a normal knee, the kneecap movement is constrained within a groove which allows it to slide up and down but not to a side. When the patella luxates--slips out from the groove--it impairs the function of the joint.


Luxating patella is graded based on whether the kneecap pops back into proper position on its own, can be pushed back into the groove, or stays dislocated, and how often this happens. The grade determines treatment options.

If the kneecap dislocates frequently, or cannot be pushed back into place, the problem is best solved surgically.

Predisposition for patellar luxation is considered congenital; trauma is rarely the cause


The problem behind patellar luxation goes beyond a shallow groove--its a result of faulty biomechanics and conformation. The rather complex issue might involve an abnormal hip joint, abnormalities in the conformation of the thigh and shin bones, a patellar ligament that is too long, even muscle issues.

Surgical repair might involve a combination of deepening of the groove and/or realignment of other parts.


This surgery realigns the pull on the kneecap. It does involve cutting the bone to which the patellar tendon attaches and securing it into a position where it better aligns with the groove. It is done this way because bone heals better than a tendon would.


This is the most obvious repair-deepening of the groove if it is very shallow.


This procedure involves placing an implant which increases the height of the affected ridge--most commonly, the patella dislocates medially, toward the inside of the leg.


With a prolonged dislocation, the muscles opposite of the position of the kneecap get stretched and the ones on the same side shortened. Once things are in their proper position, the loose muscles are tightened and the tight ones freed up.


This is a procedure to straighten the thigh bone in dogs who have a severe bow. A wedge of the bone is removed, and the thigh bone is secured with a plate and screws to become more straight.

A potentially much more complicated fix than you'd think, isn't it?


Fortunately, unless further serious issues such as hip dysplasia are involved, the outcome of the surgical repair is quite positive and the chances that lameness returns are low.