Hanging by a Thread? Stabilizing Forces in the Canine Stifle

August 09, 2018
A [cranial] cruciate ligament (CCL/ACL) tear is the most common knee injury in dogs. Is the knee anatomy to blame?

Is the fate of the knee literally hanging by a thread of the cruciate ligament? 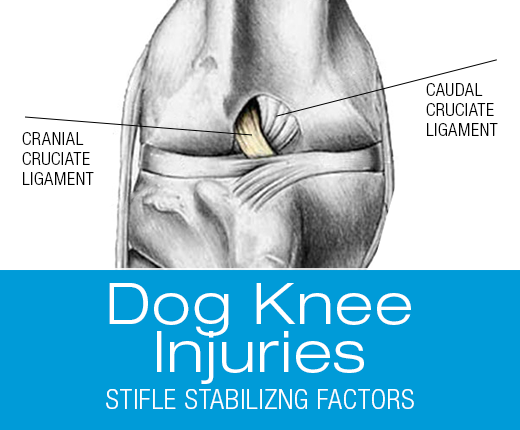 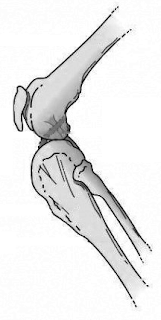 If you look at the anatomy of the bones, the knee joint does look like the most unstable conformation imaginable with the tip of the femur literally just balancing on the top of the tibia. It appears to be the equivalent of a person tiptoeing on a tightrope.

Now imagine that person being kept from falling off by a tiny rubber band. Ugh. Ligaments are tough but seriously? Did mother nature pull an evil prank? And if that's so, how did wolves, dependent on being able to hunt down prey, made it through the evolution to this day?

Did we screw this up through breeding?


Some argue that the tibial plateau angle--how sloped the top of the tibia is--is one of the primary determining factors. That would make sense. It's easier to fall off an incline than off a level ground. To fall on the level ground, you'd either need to be drunk or amazingly clumsy.

A study comparing the tibial plateau angles (TPA) in dogs with or without CCL injuries and wolves, though, didn't find much of a difference. (Source: University of Zurich)

Taking a look at the stifle anatomy, shouldn't the CCL provide only minor corrections rather than holding the whole thing together? And if that is the case, what else needs to fail for the ligament to tear?

The function of the CCL


There are two ligaments within the stifle; cranial, and caudal. One serves to prevent the femur from thrusting forward, the other prevents it from sliding backward. Shouldn't the patellar ligament help the CCL with the job? It surely is much bigger?

The canine stifle consists of more than just a couple of bones and a couple of ligaments. What about other tissues such as the cartilage or synovium? What about hind leg muscles? 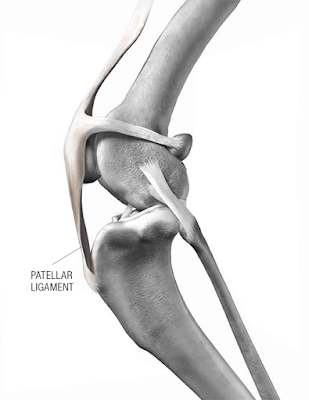 More often, a cruciate injury is a result of cruciate disease rather than a sudden trauma.


Muscle weakness and dysfunction, misalignments and instabilities, distorted joint contact areas and pressures, conformational changes, as well as biologic components including inflammation, degeneration, and impaired tissue regeneration and maintenance all play their role.

What comes first, poorly ligament in an otherwise normal stifle or an abnormal function of the stifle? Or is it a combination of both?

Nobody knows for sure.


I figure that evolution would not result in faulty parts because, without a correction, a species would not survive. The original engineering then must be adequate, and something got screwed up due to our [human] influence.

The knee stability involves a number of players.


The stifle stabilizers include not only the cruciate ligaments but collateral ligaments, menisci, joint capsule, muscle and tendon components. In other words, if things go wrong, the CCL cannot be the only one to blame. That just wouldn't make sense. You wouldn't use a paddle to steer a cruise ship.

Hormonal and metabolic issues have recently been implicated in cruciate disease. Obesity, early spay or neuter, hypothyroidism all have their involvement.

Understanding the problem helps with prevention and treatment.


It would seem that focusing too much on the ligament alone misses the bigger picture. If the button on your pants comes off, you can focus on that alone and merely replace it. You might, however, miss the point that the pants no longer fit and you either need to lose some weight or get a new pair of pants.

To me, this says that simply trying to replace the stabilizing force of the CCL might be an incomplete answer to the problem. Which would also explain why surgery alone, whichever one you might choose, will not restore your dog's leg to full function. Physical therapy, medical and nutritional support are an inseparable part of the treatment.