Symptoms to Watch for in Your Dog: Polka Dot Stools

May 17, 2018
If your dog's poop looks like somebody just had a birthday party in their belly, somebody did. Cooties… in other words, parasites!

Unfortunately, it will not look as cute as in this illustration. 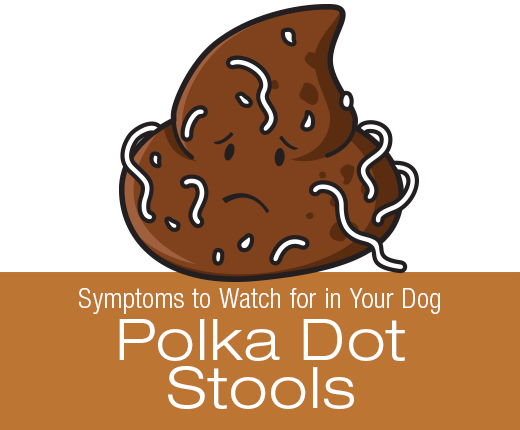 That said if the pie isn's freshly baked, the worms might not have come out of your dog's bum, they might have just shown up after the party’s started, so to speak. I have seen freaked out people sharing photos of worms that invaded their dog’s poop after it’s been on the ground for awhile and I have seen that happen every now and then too; guest showing up for an open buffet.

It is also possible that your dog ate something that didn't digest well and that's what you're seeing. Some foods don't digest, particularly when eaten whole, but you might need to freak out if you see rice-like things in your dog’s poop or around your dog’s rear end. They’re probably tapeworms.

Once you've seen the tapeworm segments, you will recognize them.


If a tapeworm is a worm, why does it look like rice? Well, it doesn't, until it does. They do look like worms when they are inside your dog’s body, but they shed body segments as part of their life cycle. When the segments first come out, they are small, white and may even wiggle. But as they dry, they shrink up into what looks like rice. I actually saw a couple crawl right out of Cookie's bum and then experimentally watched one shrink.

Cookie most likely got them from eating a squirrel or from fleas. An ingested flea is the most common way dogs get tapeworms.

Tapeworms and roundworms are the only ones you'll usually be able to see with your eyes.


If you actually see worms in your dog's poop, you have a leg up. Because only two out of the four common intestinal worms can usually be seen in the stool; tapeworms and roundworms.

Roundworms look more like what you’d think of a worm looking like. Long and, well, round. Unless your dog has lots of roundworms, though, you probably won’t see any in the poop. Just because you don't see any, doesn't mean they're not there.

You may or may not be able to tell whether your dog has worms by other symptoms, such as diarrhea, vomiting, a pot-bellied appearance, weight loss or dry hair.

That said, I am not a fan of treating a problem I don't have; I wouldn't routinely deworm my adult dog. I do, however, have the poop checked regularly. Worms are not only gross but severe enough infestation can be dangerous.