Symptoms to Watch for in Your Dog: Blood in the Stool

May 10, 2018
If you're the kind of person who freaks out at the sight of any blood in your dog's poop, your dog is better off than if the opposite were true. Blood has no business being in the poop.

It is not always the end of the world type of emergency, but it always needs to be taken seriously. 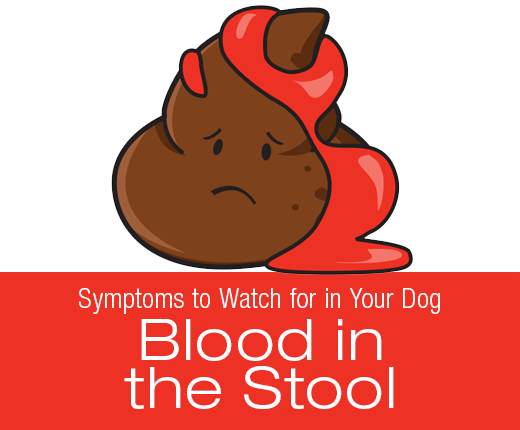 How quickly you need to see a vet depends on how much blood there is, and whether there is also diarrhea, vomiting lethargy or other concerning signs.

One drop of blood does not an emergency make, but things can change quickly.


If the blood in your dog's stool looks like actual blood, it is coming from the large intestine, rectum, or nearby structures. If it came from higher up in the gastrointestinal tract, it would not have the typical bright red appearance. Such partially-digested blood would make the stool look dark and tarry.


A dietary indiscretion, particularly with diarrhea, can irritate the colon enough to cause mucus and even blood in the stool. Even an abrupt change of food can do that to some dogs. JD did this to himself on occasion; his poop would be runny with the odd drop of blood. He'd act normally otherwise, and the problem would resolve itself by the next day. He did not need veterinary treatment.

Jasmine would have a small amount of blood in her diarrhea when her IBD was acting up. She did need medical attention. Just goes to show that the same signs in different dogs can mean very different things.


A foreign body, such as a piece of a stick, a chunk of undigested bone, rocks, and other objects can injure the lining of the gastrointestinal tract and make it bleed. Again, the injury can be minor or major; are you willing to take a wild guess?

One question I always keep in my mind, how much blood there might be that I don't see? Is my dog in pain? Lethargic? Bleeding anywhere else? Having unexplained bruising? Looking swollen?


They recently changed the name of this condition to acute Hemorrhagic Diarrhea Syndrome (AHDS) because it seems that the stomach actually isn't involved with the problem.

Whatever they choose to call it, it doesn't make it any less terrible. Either way, it comes with lots and lots of blood. It's what I meant when I said that a couple of drops of blood don't an emergency make, but this can change in a blink of an eye.

With HGE/AHDS the poop can look like straight blood. Clearly, that is an extreme emergency. That's also while I said that it is better to be paranoid and see a vet with one drop than wait until things might get this bad.


If a puppy has any amount of blood in the poop, it's an emergency. In fact, a sick puppy is always an emergency no matter the signs. Bloody diarrhea is a common symptom of the dreaded disease parvovirus but can also be seen with a variety of other viral and bacterial diseases that can affect puppies and adult dogs.


The parasites most likely to cause blood in the stool are hookworms, whipworms, Coccidia and Giardia. Sometimes symptoms like diarrhea and a pot-bellied appearance appear first but blood in the stool may be the first indication that a dog has intestinal parasites. Either way, intestinal parasites can kill a dog, particularly a puppy, so never think “oh, it’s probably just worms.”

Another thing that can cause bloody diarrhea is stress.


Stress can not only aggravate any existing problem, such as IBD but even cause what is called stress colitis with bloody diarrhea with mucus.

There are other causes

If you're an experienced dog parent, you might be able to tell when a few drops of blood are not a big deal and when you should see a vet as soon as possible. Even then I always tend to err on the side of caution. I'd recommend to at least talk to your veterinarian if you find blood in your dog's poop.