Don't Miss the Forest for the Trees: Duke's Story

An obvious diagnosis might not be the right diagnosis. 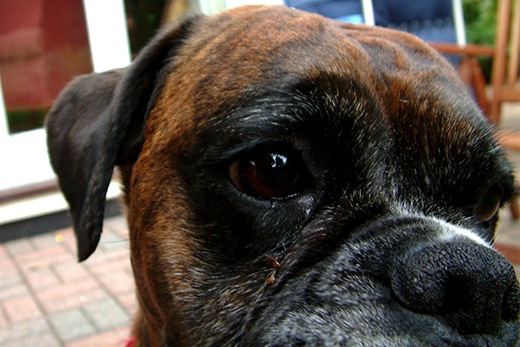 Don't let your vet insist on a diagnosis based on the first thing they might stumble upon when trying to figure out what's wrong with your dog. Even if it might make sense at first.

If your dog isn't getting better with treatment, either the diagnosis or the treatment is wrong.


Duke was a happy 7-year-old Boxer. He was living a happy life until he suddenly started having serious problems. He was lethargic, losing weight, painful lower back, and some lameness of back legs.

Duke was examined and diagnosed with spondylosis.


Spondylosis is a spinal issue that could explain the symptoms and Boxers are one of the breeds that have a genetic predisposition for the problem. Pain could explain lethargy, lameness and even loss of muscle mass, particularly in the hind end.

Duke was treated based on the diagnoses but wasn't getting any better.


He kept losing an enormous amount of weight in spite of having more than a hearty appetite. He was becoming skin and bone literally, looking almost like some of the photos of emaciated rescue dogs. He was losing a lot of weight everywhere, not just on the hind end. Duke also started drinking large amounts of water.

In spite of his treatment, Duke kept getting worse until he became unable to walk down the stairs or to use the bathroom and required substantial help to get out and eliminate.

The owner was able to collect a sample for urinalysis.


They also decided to seek a different vet because they no longer believed that spondylosis was what was causing all this trouble.

Duke's urine was extremely concentrated, contained a bunch of blood, protein, and crystals. The urine itself was not enough to come to any conclusions, and the new vet kept Duke for further tests.

Duke's body was ravaged by a systemic disease.


The vet concluded that Duke had either cancer or immune-mediated disease but was at the point that he was not going to be able to make it through and Duke was set free from his physical suffering.

Yes, Duke did have spondylosis. But that was not at all what ravaged his body and took his life.


Your story can help others, maybe even save a life!

An award-winning guide to better understanding what your dog is telling you about their health, Symptoms to Watch for in Your Dog, is available in paperback and Kindle. Each chapter includes notes on when it is an emergency.
dog conditions