That is less than the percentage of people who consider fresh blood in stool an emergency. I would agree that finding fresh blood looks much scarier. The visual effect isn't there. But do you know what you're looking at? 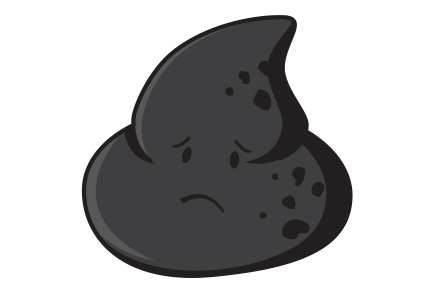 
Blood isn't always the nice bright red color we expect to see. In the poop, blood looks like blood only when the bleeding is in the large intestine or rectum. When the bleeding happens higher up in the digestive tract, or blood from the mouth or respiratory tract is swallowed, the digestive processes change what it looks like.

It is still blood.


While finding a bit of fresh blood in the feces may or may not represent an emergency, I'd always consider black, tarry stool to be one unless proven otherwise. It can, sometimes, have a benign reason behind it but how would one know?

Black, tarry stool would scare me way more than a bloody one.


You might be looking at a severe, life-threatening illness. If your dog is pooping black tar, the reason behind it can be a bleeding ulcer, tumors in the stomach or esophagus, severe infection, damage from a foreign body, abnormal blood clotting, poisoning, pneumonia, kidney failure ...

A speck of red blood can easily get your attention.

It takes a substantial amount of blood to change the appearance of stool to look black and tarry. You're not looking at a few drops.


Think about it. Black, tarry stool isn't just about where the bleeding occurs. If a few drops of blood got digested, you would not notice them in the stool at all. The poop would just look like poop.

You won't see it unless there is lots of it.


If my dog passed black, tarry stool, I am on my way.