It’s 2017 the New Year. I see many resolutions being made and people calling for a new start. For me, I am still recovering.


He was My Love's brother. They were rescued together from a canal. I adopted them as a pair and they had not spent any significant time apart. They had a love/hate relationship like many brothers. At times they couldn’t stand to be around each other and fought but at the same time put up a fit if they were apart. 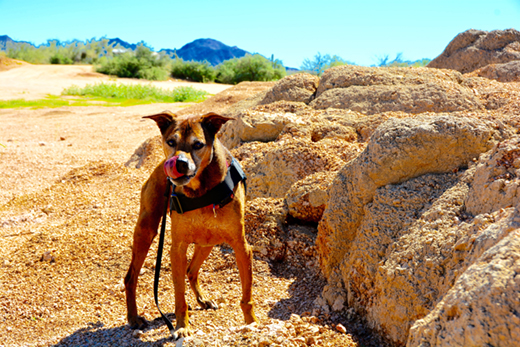 I worried about My Love and how he would do. He was the last of my pack.


When those 2 arrived I already had 2 dogs so they became a pack of 4. My Love never did well alone. He chewed through doors and walls and broke a countless number of crates over the years in order not to be contained and alone. I was fortunate that Harry passed away at home so My Love had the opportunity to know that he was gone. Surprisingly, that was never an issue.

I imagine that being 15 yrs. old had a hand in the way he accepted being an only dog. He was the king of the palace. He was hearing impaired from old age and was severely arthritic from all the surgeries.

He still loved car rides, especially to his acupuncture appointments and to visit his favorite pet store. Thankfully, I couldn’t keep him out of the swimming pool even if I wanted to. Swimming was essential for his exercise and he enjoyed every minute. He rarely would actually swim when I wasn’t home but he would hang around on the steps and soak himself. One of the cutest sights ever was to arrive home from work and see him staring intently at the gate, waiting for me. All I could see was his head lying on the pool deck while he was chilling his body in the pool. 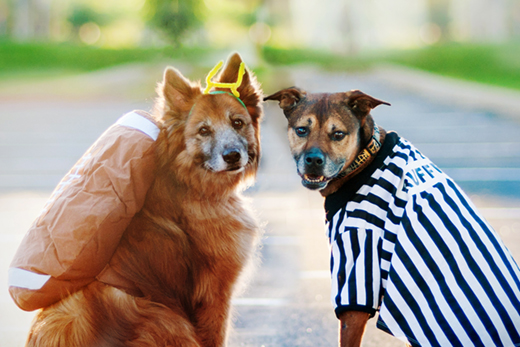 I started cooking for both the dogs when Harry got so ill.


It didn’t stop when it was just My Love and I. Most everyone told me that my dog ate better than I did which I won't deny. I would cook a 10lb roast with sweet potatoes, broccoli, and mushrooms, and we would share one meal together and he would get the rest.

He was still getting acupuncture regularly and taking Chinese herbs, fish oil, and other supplements as needed. I even became accustomed to the smell of raw green tripe, as it was one of his favorite things to eat. It must be the worst smelling thing I have ever had in my kitchen but for My Love, it was my pleasure. Raw goats milk was another of his favorite snacks. 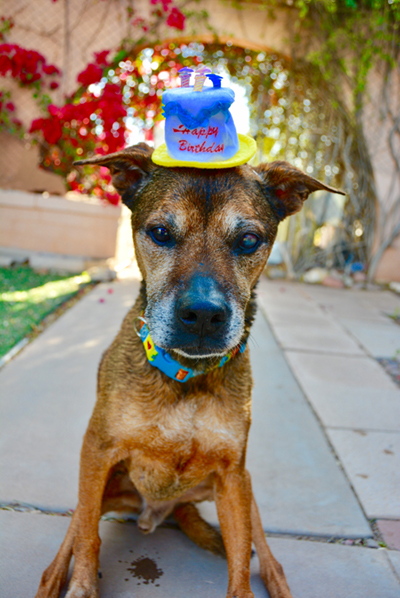 Throughout the spring and summer, My Love started looking like an old man.


He was getting deluxe meals from his personal mom chef but he started losing weight. His energy was low. We battled a corneal ulcer and that front leg swelling. He had a couple episodes of vestibular disease which while it resolves itself in a week or two, it's difficult to watch when he was falling down and walking sideways.

He was getting tired.


In July, he started having some other neurological-type symptoms. It was some type of seizures where his body would become still and freeze. He was conscious but not able to respond. After some time he would snap out of it and resume his normal old man activities.

If you have read part one and part two of his story, you know how much he has overcome in his life. 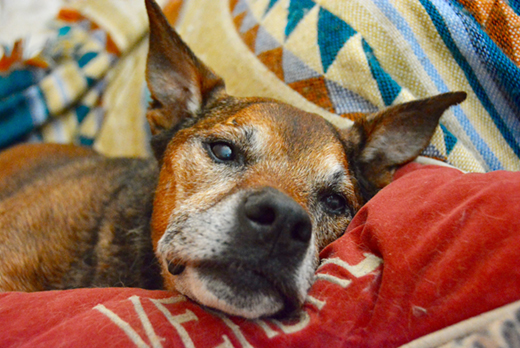 I was lucky to have had two of the most wonderful veterinarians that helped me care for him over the years. His holistic vet was his primary caregiver over the last year. Every time I needed a lifeline for My Love, she threw one. She was always there to help him. She held my hand when I needed it but also was brutally honest about things when appropriate.  The amount of knowledge I gained from working with her as she helped My Love is immeasurable.

July. Time was getting near.


I knew it but I didn’t want to accept it. He was so thin and so tired. He wasn’t eating well. Even his favorites weren’t getting him to eat. Still having those seizures. I spoke with both of my vets. I talked with an animal communicator. My heart was breaking.  When I made that long dreaded appointment I was asked if it could please be at the end of the day so my vet wouldn’t have to see other clients. Everyone loved this dog.

The day before I loaded up a cooler with water, stopped by McDonalds and got some cheeseburgers and fries, and we headed to the lake one last time. He loved the picnic.

I was still questioning if I was doing the right thing and whether it was really time.


As we walked to the water's edge and entered the water, I sat down on a rock. Instead of swimming out into the water, My Love swam straight onto my lap and I just held him tight and cried. On the way home we had Dairy Queen.

It was peaceful. We were surrounded by love…my vet and several of the techs stayed to be with me. We all kissed him and I played a favorite song. And cried. It was the hardest day of my life in a very long time.


This dog was special. My heart and soul dog. The connection we had is hard to describe to people. We knew each other so intimately and intensely. Our love was so strong. I know there are many animal lovers out there but not everyone finds that one special one that embeds themselves so deeply in your heart. Most don’t understand the grief. 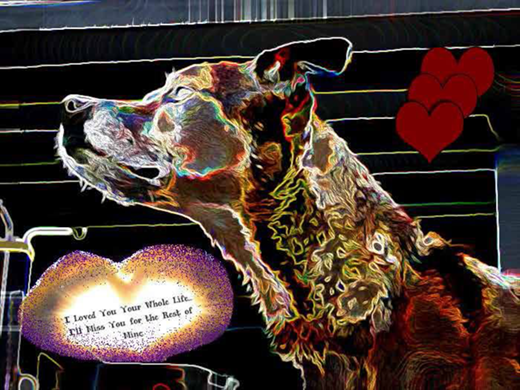 For me, everything has changed.


I have been so lost. I spent the past 2 plus years being a caretaker; cooking, cleaning, meds, therapy, appointments, essentially rearranging my life all for my dogs. Now I have no dogs, no routines, and no reason to get out of bed. I miss my veterinarians and all the people at the office. It all stopped and went away when My Love took his last breath.

The pain of grieving is some days so strong that my chest hurts.


I still cry often. I expect to see him on his chair or sniffing the counter or picking a toy to have our morning play. And being in the pool without him…it’s all so very quiet. It’s not something I could prepare for. He was old, you had a lot of good years, it was the right thing to do, he had a good life.

None of those things are helpful to hear.


Many people think I should be over it so I don’t mention it anymore. But it hurts and my emotions are still very raw. It has been more than 20 years since I haven’t had a dog. 15 years of constant companionship from My Love.

It's 2017 and I am just navigating through my grief and trying to find my way. Another dog may come along but I’m not ready. My heart isn’t ready to let another in. I will get there because I love dogs. For now, My Love, my sweet boy named, Verb, is no longer sleeping by my feet. He is resting in my heart forever. How special that is!