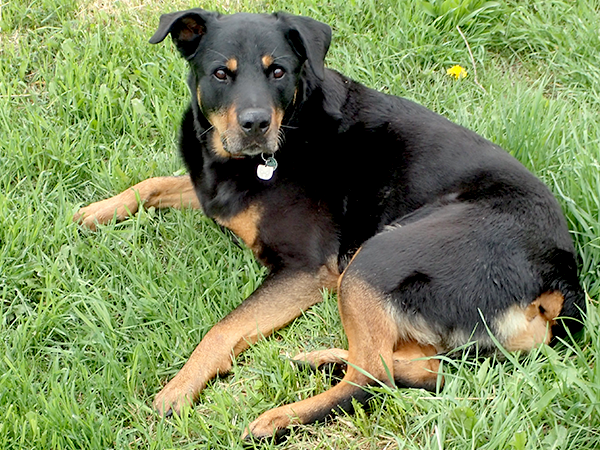 With JD virtually unable to walk at all, we were sitting at the vet's waiting for the blood results, hoping his liver values were high.

In the meantime, the vet called up a neuro specialist to consult on what was happening. The specialist definitely didn't believe all this could have been caused but a reaction to the Metronidazole but then, neither did we any more.

The most likely scenarios, unless the blood showed something significant, was either infection or cancer in the brain or in the spinal cord.


We were really hoping the blood was going to offer a better reason.

But the results came back and everything was normal. There was nothing remarkable on there at all. That hopeful theory was out the window.

Here were the findings as the vet wrote them in her notes:

The vet kept repeating she was very concerned about his neurological state.

She said we could go and see a neurologist; she'd get us an appointment for the next day. They'd keep him for two days to run diagnostics to see whether they can do anything about this. She was listing the possibilities.

The look on her face and tone of voice said more than her words, though.

Perhaps an abscess was behind the swelling and spilled? Perhaps cancer was there and bled or threw an embolism?

Should we go through with figuring out what this is exactly and maybe be able to do something about it? And that something maybe working? JD was insured, finances weren't an important part of the considerations. It was the poor odds and putting him through all kinds of stuff perhaps for nothing.

Appointment the next day meant JD having to remain in this state, or getting worse till then. Then it meant a day's worth of drive. And then two days in a hospital. And then, if they could attempt to treat, further stay in the hospital. Knowing JD, he was likely to die of grief the first day. He was distraught over the state he was in enough as it were.

Just because we could keep trying, did that mean we should? Should we keep poking and prodding and putting him through all that perhaps for nothing? Should we hold on to him in spite of his misery?

JD was miserable and would have been even more miserable.

Because JD was hubby's buddy, I made it hubby's call, even though we discussed it in length. Having seen Jasmine being so miserable her last days, only to get worse, seeing the odds were just about the same this time,

JD had a happy life. He got the spend the night cuddled up with hubby. Prolonging his misery didn't make sense to either of us. Not with the odds as slim.

With all the available technology and medical advances, one could keep going to almost no end.

When the chances are good, and one can afford it, it makes sense to take full advantage of all that is available in veterinary medicine nowadays. But to keep going for the sake of keeping going wasn't something we wanted to do to him.