With the working hypothesis of JD's neurological problems being from the meds, we were hoping things will get better as the Metronidazole clears out of his system. If the theory was correct, we should see improvement by next morning. 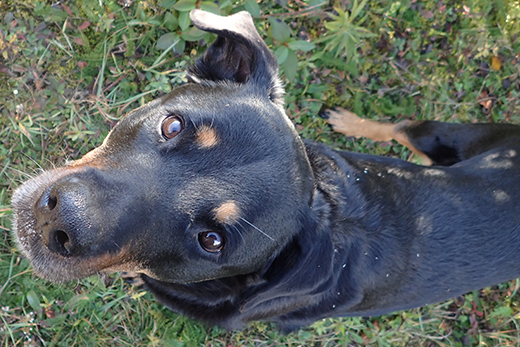 By the end of the day, he didn't get better but didn't get worse either.


I made sure he stayed hydrated; he'd have too much of a hard time drinking, so I'd mix some water with a bit of liver powder into a small bowl, and he could drink that while laying down. Did that through the day to make sure he gets enough liquids. He was eating normally. He didn't want to go potty at the end of the day, so we took him back in to deal with what comes next when it does.

I did hope there would have been SOME improvement, though, and after he had refused to try and go potty we discussed whether we should take him to the vet after all. At that time we'd been told there is no "antidote" to Metronidazole neurotoxicity, but he could get IV fluids to try help flushing it out of the system faster. Eventually, we decided to wait until morning unless things got worse.

Note: There IS actually an "antidote" for that as I found out from my toxicology veterinary friend the next day--IV valium.


Unless he had to try and get up, he was comfortable.


He had his dinner and curled up with daddy for the night. His breathing was peaceful; there was no indication that we should treat this as an emergency.

In the middle of the night, he finally had to go pee. It was quite an ordeal but even though stumbling, did manage on his own. There was still about 8 hours to go; there was still good hope thing will improve.

Then the morning came.


I didn't have to wait to see what he's going to be like getting up. Just as he was still laying there on the bed, I knew he did not improve. In fact, my guess was that he got worse. I noticed when I got closer his front left leg moved as if he was lifting it to get a belly rub. But something about that didn't look like a purposeful movement.

I took Cookie out so hubby could attempt getting JD to go potty as well as see what things look like. After a lot of struggle they made it off the bed to the door ... and that was it.

The day before, when talking to the local vet, we have made a tentative appointment for later in the day in case things didn't improve as they should.

I didn't think we should wait another half a day.


I called the vet to let them know that I wanted to bring JD in on an emergency basis instead. "You can bring him in but it's up to the vet to decide whether he should be treated as an emergency," was the response. Well, we were going.

To load JD into the truck, hubby had to virtually carry him.


While JD still managed to go potty on his own at night, now his front end wasn't working pretty much at all. They were mostly just hanging, crossing each other, paws knuckling ... We did manage to load him up and get him settled. Hubby took off to the vet while I stayed behind with Cookie. Having two dogs in there with JD in his condition wasn't a good plan.

That was when I first had the feeling JD might not be coming back.


A lot of this was too reminiscent of Jasmine's last days ... Cookie too knew something was very wrong. Normally, she'd be quite upset with somebody going for a ride without her. Not that morning.

I was concerned whether JD can make the trip safely enough in his condition. If he tried to move around, he could fall quite badly. Fortunately, they did manage, though getting JD from the truck to the vet's building was another major ordeal.

Having the ramp and the support harness was a life saver. I don't know what we'd do if we didn't have those things.

As the technician saw hubby and JD struggling to get in, she ran out to help. "Now," she said, "I'll get the vet to see him NOW," and she helped them to the exam room.

JD's vet indeed showed up in a couple of minutes; all dressed up in her dental surgery gear.


"I am very concerned about his neurological function," she said. So were we.

Because crazy liver values could cause this as well, first thing they did was to draw blood and then the vet started the neurological exam. It wasn't looking good, but we knew that. At this point, there was pretty much zero chance that this could have been caused by the meds.

The best we could do was to hope that his liver values were indeed high.


But there was no nausea, no vomiting, no diarrhea, no jaundice ... no nothing which would point to a problem with the liver.


Related articles:
Bugs. I Hate Bugs. But They Seem to Have Nothing to Do with JD's Puffy Eye
The Saga of JD's Puffy Eye Continues
If We Don’t Hear From The Vet Today, We’ll Be There First Thing In The Morning: Jd’s Swelling Keeps Bouncing Back
What Turned out Not Being an Adverse Drug Reaction after all (Part I)