Two weeks ago JD headed to a vet because of a swelling above his left eye. 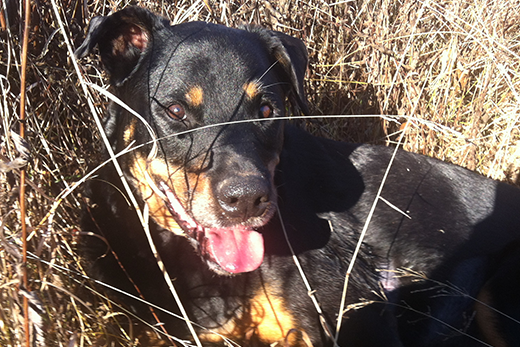 It was the third time the same area had swollen.

Then the same area had swollen once again, for the third time.


Getting stung in the same place three times? Statistically it might not be impossible but we weren't buying that.

I called the vet and explained what was going on. She figured it could indeed had been a stinger that remained in the tissue and asked whether we just wanted to try some antibiotics or bring JD in.

I prefer knowing what I'm treating.


After an exam, the vet concluded that what probably happened was that JD was chewing on a stick and a splinter got caught in his mouth. She said this was a third dog with this problem she's seen that week. Typically, the culprit is long gone but the infection makes it's way through the path of least resistance and the dog ends up with a swelling above their eye, just like JD's.

Based on that theory JD got put on antibiotics after all.


We finished the course diligently (always go through the full treatment if your dog is on antibiotics!) and the swelling went away. A week later the vet called to check on him and everything looked good.

A week after we finished the antibiotics, I was looking at JD's head and it was starting to get puffy yet again.


Ugh. Perhaps the splinter or whatever else was still in there after all?

It was time for foreign body hunting.

When Cookie had the chunk of a porcupine quill in her foot, it too kept getting infected, healed with antibiotics, then infected again. It would make sense to assume the same thing was happening with JD.

Back to the vet. This time JD would get some imaging, including dental exam and x-rays. A bad tooth was my initial suspect but it wasn't really adding up. Swelling on the head from a bad tooth? I'd expect it anywhere else but there. But we needed to find out what is causing all this trouble.

JD got a bunch of x-rays of his head, dental x-rays, and close examination of his mouth under sedation. No suspects were found anywhere so he got ultrasound as well.


Nothing other than some thickening of the skull in the same area. Thickened bone is suspicious. The vet didn't see anything wrong with the bone other than the increased thickness but we agreed to send it out just to have more than pair of eyes looking at it.

Four radiologists checked out the x-rays and didn't find anything suspicious other than the fact that the bone is thicker.

Could it be from the lingering infection?


I actually wonder whether it has nothing to do with the present situation at all but rather with JD's habit of crashing head first into everything in sight when he was little. One time he hit a tree so hard I heard something crack. I'd swear he must have cracked his skull but he was fine. There also was no evidence of remodeling on the x-rays, just thickening.

One way or another, the thickened bone isn't to worry about but there is a lingering infection whatever it was originally caused by.


Perhaps the first course of treatment was to short to clear it up properly? Interestingly, we got the exactly same amount the second time around. As I was watching the progress, though, I really felt that the treatment needs to run longer if we are to clear it up for good. I asked for additional meds and we'll see whether that will do the trick.


I hope this will finally do the trick.


Related articles:
Summer Dangers: Cookie Gets Stung by a Bald-faced Hornet
Dogs, Porcupines, Wasps and Learning
Grocery Bag Is Not An Open Buffet: What Was In JD's Vomit
Bugs. I Hate Bugs. But They Seem to Have Nothing to Do with JD's Puffy Eye