Bugs. I Hate Bugs. But They Seem To Have Nothing to Do with JD's Puffy Eye

August 16, 2016
Bugs are the hallmark of summer around here. Starting with black flies, followed by mosquitoes and deer flies. Now all that is slowing down, and it's time to switch from biting flies to stinging bugs. Bees, wasps, and hornets are in the full swing. 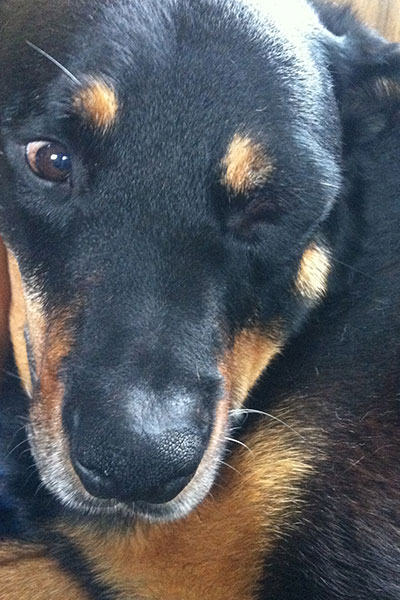 Just about exactly a year ago Cookie got stung by a bald-faced hornet.


This year she may or may not have got stung again; she did fly out of the grass shaking her head and running for cover, but when I went back to see what it could have been I haven't found anything. I gave her some Benadryl immediately; she didn't swell anywhere. The only thing I hate more than my dogs getting stung by something is having no idea what actually happened.

But there are so many everywhere, both her and JD do jump up from various places with the same reaction. Perhaps they're just getting startled ...

About two weeks ago, something was off with JD.

First thing in the morning, as we were heading out, I heard him whimper behind me. I didn't see what he was doing at the time. I quickly checked and didn't see anything wrong. We went out, and all seemed fine.

Later that day, though, he did it again. Something was going on, and yet I still couldn't identify a problem. I felt, rather than observed that it had something to do with his face, mouth or head. Bad tooth perhaps?

I had hubby check his teeth and mouth, but we couldn't find anything.

It wasn't until later in the afternoon when his eye got puffy. Well, not the eye itself, but the eyebrow. Given how many stinging insects are around and the places he sticks his head into, it was a logical assumption that he got stung. Probably first thing in the morning, when hubby took him to pee before the actual morning walk. That would explain things. 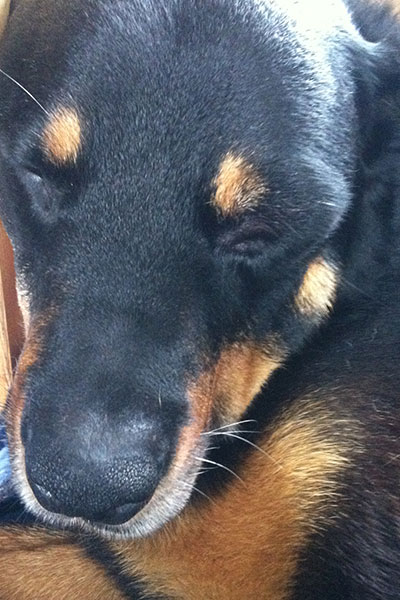 I gave him some Benadryl and by next day the swelling was gone.

All was well until last Thursday when he woke up yet with another swelling at almost exactly the same spot.

What are the odds of him getting stung twice in the same spot?

Well, okay, the odds are always 50/50, aren't they? Like in the Gone Fishin' movie where the poor guy got struck by lightning for the third time. Just after his friend convinced him, "What are the odds of one person getting hit by lightning three times?" Pretty good, as it turned out.

But still, it was strange. Not impossible, but strange. More Benadryl then. Swelling did go down, again. On Friday, all looked well. But on Saturday the swelling was back.

That's not how you'd expect and insect sting to behave.

And getting stung three times in the same spot, in spite of the movie, is just ridiculous.

As the vet was examining JD, she asked whether he's been chewing only on one side. Well, we don't know - JD does not chew his food.

She asked hubby to try and open JD's mouth wide to see whether he'll respond. And indeed, he whimpered.

"This is the third dog I've seen this week with this problem," the vet said. "They were chewing on a stick and got a splinter caught in the soft palate. While the splinter is likely gone, because of all the bones in the way the infection doesn't have anywhere else to go other than making its way above the eye."

JD did get antibiotics, and the swelling is just about gone now. We shall see whether that will take care of it or not. The potential complications are the splinter (or whatever it was) still being in there, and/or an abscess. Hopefully, none of that is going to be the case.

We don't encourage JD to chew sticks but out here in the bush, one cannot watch him every minute of every day. He'll chew stuff, he'll eat stuff ... He does have a history of eating sticks. I smell a muzzle in his future. Though I have seen a dog, wearing a tight muzzle, still able to get a dead mouse in his mouth. And according to the owner that was a fifth different type of muzzle they tried.

Where there is will, there is a way, I suppose.

JD eating stuff was the initial reason I got the health insurance for him.

Related articles:
Summer Dangers: Cookie Gets Stung by a Bald-faced Hornet
Dogs, Porcupines, Wasps and Learning
Grocery Bag Is Not An Open Buffet: What Was In JD's Vomit