Top Veterinary Articles of the Week: Leptospirosis, Rabies, and more ...

We used to vaccinate against lepto because of the area we lived in. Since we moved we didn't vaccinate as our local vet informed us that the serovars present in the area are not covered by the vaccine. There is no cross-immunity. When we were to travel for hubby's work, we were deliberating whether we should vaccinate or not. We decided to do so but because Cookie decided to grow a lump we ended up not doing that.

Things are changing, however, and diseases travel. Our local hospital is now starting to vaccinate as well which means changes in status quo. So we will have to deal with the dilemma once again and most likely will start vaccinating again. Since the immunity lasts under one year, it probably makes most sense to vaccinate early in the year to cover the offending seasons. If the immunity runs out for the winter, nobody cares because everything is frozen and under snow. There is still risk from exposure to wild or farm animals but given how long the vaccine lasts this seems to be the best decision. 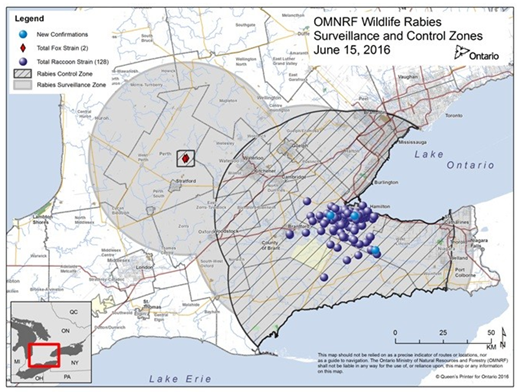 "There is never a problem until there is," Jasmine's vet always says. In Ontario, raccoon rabies had been eradicated. Until it wasn't. Since last fall I've been watching news or more and more raccoon rabies cases. We might still be in a clear up at Jasmine's ranch but it's all around the horse farm our guys used to spend every weekend until we moved.

If it was fully eradicated, where did it come from? The problem is that raccoons don't recognize borders or country boundaries. It's all the same to them. The rabies virus hitched a ride on an adventurous raccoon that decided to take a vacation. Quite a vacation too, because the identified strain matches most closely to the one from southeastern New York state. and now we have a big problem. To date, 128 cases were reported in the raccoon and skunk populations. If our guys were still going regularly to the farm, it would likely have meant a ban on any off-leash fun.

Not happy about all these rabies. I hope they find a way to eradicate them once again.


Obesity and Diabetes: An Epidemic Amongst People and Pets
Dr. Nancy Kay/Spot Speaks

The latest Association for Pet Obesity Prevention (APOP)'s 2015 study shows that 54% of evaluated dogs were overweight or obese. I know it can be easy to have a dog pack on an extra pound or two. We're just working on Cookie dropping what she gained during her exercise restrictions. The important thing is to know when this is happening and do something about it. The longer you let it slide, the harder it's going to be.