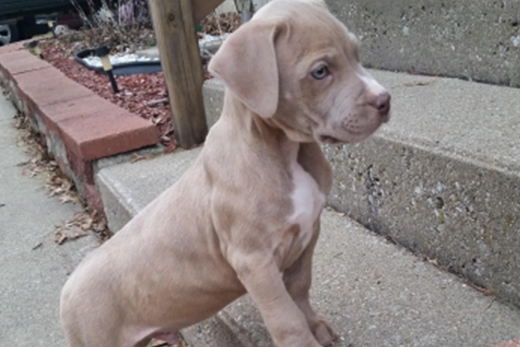 Puppies and kittens are attached to their mothers via the umbilical cord, just like human babies.  The umbilical cord is how nutrients pass through the bloodstream from the mother to the growing fetus.  Once the cord is cut, the stump dries up and falls off, leaving a small swirl-shaped spot that is similar to the belly button in people.

The cord attaches to the blood supply of the newborn through a small opening in the wall of the abdomen, which normally seals off shortly after birth.  However, in some cases, the opening does not seal properly so that a small amount of tissue from inside the abdomen can "pop" out under the skin.

This persistent opening is an umbilical hernia.

Umbilical hernias can often be seen as a sort of skin "bubble" in the middle of the animal's belly.  Usually, they are only about the size of a marble, but they can be much larger depending on the size of the opening and the amount of abdominal contents that have pushed through.

Your veterinarian will usually be able to diagnose an umbilical hernia by its appearance and by the ability to gently maneuver the material back into the abdomen.

Very small umbilical hernias may never cause a problem.

However, material from the abdomen (eg, a loop of the bowel) may pop through the opening and become trapped, cutting off its blood supply, which is a serious situation.  For this reason, umbilical hernias should be surgically repaired.  The repair is a simple operation that is usually done at the same time that your pet is spayed or neutered.