The iliopsoas muscle is actually two muscles fused together - the Psoas Major and the Iliacus.


This muscle is quite long attaching the underside of the last 3-4 thoracic vertebrae, all the lumbar vertebrae and a part of the pelvis  (cranioventral illium) to the lesser trochanter, a small protuberance from the bone just below the head of the femur on the inside (medial side) of the hip.


The iliopsoas muscle is part of the core muscle group. 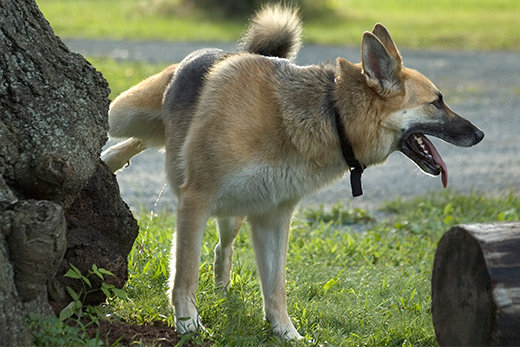 Iliopsoas main function is to flex and externally rotate the hip - think a male dog urinating on a tree. 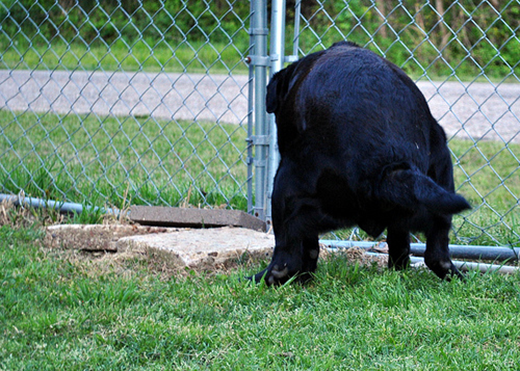 The iliopsoas also plays a part in flexing the lumbar spine, arching the back – think a dog defecating.

As a core muscle it is used in a variety of different movements such as jumping, changing directions, laying down, standing up, and forward motion.

Anytime the abdomen has to flex or stabilize and the hip needs to be flexed bring the leg forward or up the iliopsoas is involved.

In athletes such as agility dogs and herding dogs in which the body is put into contortions at a high rate of speed the iliopsoas works hard and at odd angles.

The iliopsoas is a long muscle that passes through several joints in the lumbar spine helping flex the lumbosacral joint and the hip to spring load the lower half of the body preparing it to explode forward or change direction.

Injury to the muscle occurs for one of  two reasons:

As a dog is contracting the iliopsoas either to flex the leg or flex the lumbar region, but the surface is slippery such as wet paw, wet surface, slick surface, or ice, the foot can slip causing the leg to stretch back this causes an extreme force in the muscle called an eccentric contraction.

The weakest part of the muscle is where the muscle fibers and the tendon attach together and the force can be great enough to cause a small tear at this junction. 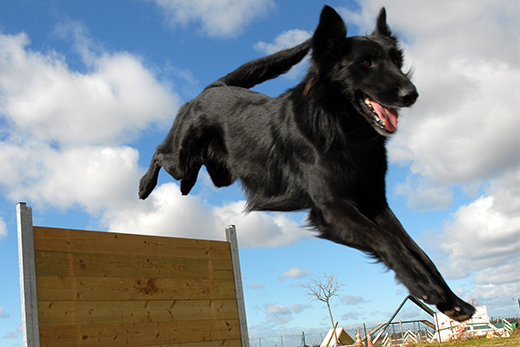 An overuse injury can obviously occur in athletic dogs from jumping or quick changes in direction, over and over again without proper build up of the muscle and/or without a variation in type of exercises.

Just doing the same thing over and over without rest allowing repair can cause a weakness in the muscle, a chronic wearing, which leads to a break down of tissue and eventually an injury.

One aspect that many do not conceive of is an injury in the lower limb causing the dog to use and abuse the iliopsoas and thus causing the same type of overuse injury.

For example, if the dog has a tear in a cruciate ligament (another common injury)and the dog consistently holds the leg up to protect the knee, it has to use the iliopsoas to hold the leg up in protection. Constantly holding the leg up wears on the muscle overstressing it and breaking down the tissue, leading to an injury. This can be confusing to an owner and the veterinarian believing that the dog reinjured the knee when in fact it injured a different muscle.

Injury of the iliopsoas muscle can cause some of the following symptoms:

n performance dogs
It may be even as subtle as a male dog no longer lifting his leg to urinate.

The problem can be complicated by having injuries to iliopsoas groups on both sides, most typically caused from overuse in performance dogs.

Diagnosis is usually achieved by palpation of the attachment or stretching the hind leg back while simultaneously rotating the leg inward. The dog will react in pain or in mild cases just tense up. A mild case can easily be misdiagnosed as just a tight muscle.

Ultrasound can possibly diagnose tears in the muscle or significant inflammation, but is dependent on the capabilities of the ultrasound technician, many are not trained for musculoskeletal diagnosis in dogs.

Radiographs (X-rays) are only valuable in long term chronic conditions in which the muscle may have some calcification.

MRI although costly would be the best diagnostic imaging available to diagnose damage to the iliopsoas.
Treatment consists of rest, rehabilitation exercises and stretching, laser therapy, and supplements supporting tendons and ligaments. In severe cases therapeutic ultrasound or even Platelet Rich Plasma Therapy done through ultrasound guided injection. Dogs usually respond well to treatment however there is a chance that the injury does not heal well and becomes a chronic nagging injury. The worst case scenario the chronicity causes scarring called fibrosis to occur and this may require surgical release to relieve pain. In these cases, the dog can still function but most likely will not return to full athletic potential.

Prevention is the key.

It is far better to prevent this injury than to have to deal with the consequences of a chronic injury to this muscle.

For athletic dogs, the warm up is THE most important aspect in preventing this injury.

This can consist of jogging, figure eight jumps over a low pole, and using ground poles or cavalettis.

Stretching should not be done at the time of the competition, but rather long before the competition, on a regular basis, meaning daily to every other day, stretching the hind leg back with an internal rotation and holding for15 seconds and repeating 3 times with each leg and only after the muscle is warmed up, such as after training or a walk.

Body work (massage, chiropractic and acupuncture) by a trained professional is beneficial in preventing and early diagnosis of a problem.

Keeping the joints moving and balanced along with the muscles loose and limber. Also the professional may be able to diagnose earlier a problem if you take the dog to the practitioner on a regular basis

Avoid running your dog on slick surfaces such as tiles or hardwood floor, or for athletic dogs mats with no grip or on muddy fields. Wipe your dogs feet when they come in from outside especially on rainy days.

For dogs with a lower limb injury of the hind leg be aware of how your dog limps or carries the leg.

Massage the upper muscles of the leg especially the hip flexors to help keep tension at bay. Be sure to rest your dog as much as possible while the injury heals. Sure a dog can get around on three legs but it is not necessarily the best as the dog was designed to be on all fours, so if your dog is limping or carrying a leg be aware that there are muscles being used inappropriately.
Massage and stretch those overused muscles to help prevent a different injury and have them seen by a practitioner that specializes in body work, i.e. massage therapist, chiropractor or a canine rehab specialist.

An iliopsoas injury can be daunting as it can be difficult to diagnose and even if treatment is done appropriately the dog uses the muscle everyday in every way and it can lead to chronic discomfort.

Luckily the majority do respond well to rest and treatment and recover fully to return to normal activities in a few weeks. Just remember, if you have a dog with a difficult, can’t put your finger on it, lameness have your vet check the iliopsoas muscle.

Daniel Beatty, DVM (Dr. Dan) is an integrative veterinarian that believes in a holistic approach to medicine and wellness. He uses the best of both the allopathic and the holistic worlds of medicine to maintain a proper balance to health and movement for his canine and equine patients.

He also blogs at Dog Kinetics and loves to teach pet owners his ideas through blogging and webinars.