Useful Tip: Stomach Unhappy from Too Much Acid?

November 19, 2015
Yesterday Cookie was in town for chiropractic and have her meds picked up and do some shopping with daddy. 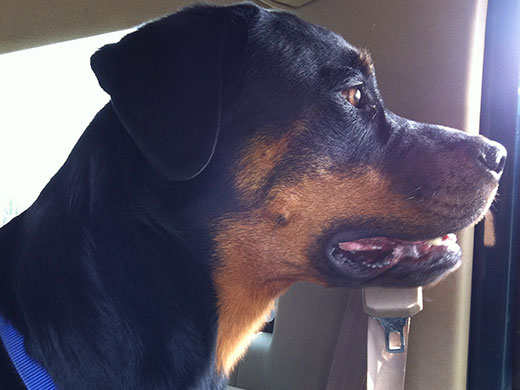 The trip ended up long and she came back home with an upset tummy.

SOMETIMES she gets her tummy upset like that in the morning; takes a while before it settles. She'll refuse food and her belly with make noises. It's from too much acid built up in the stomach. We got that worked out. It seems that couple treats and small bowl of goat's milk fixes the problem right up. When it happens from time to time, it isn't really a big deal.

But now she's on NSAIDs and anything that's happening with the belly is a big deal to me.

Plus the NSAIDs HAVE to be take with food and it didn't look like she was going to be ready to start eating any time soon. Normally we'd take her for a walk and that usually clears it up as well. But she's not allowed walks either right now.

I felt we screwed up badly.

Couldn't give her her meds if she wasn't going to eat and I was concerned what the presence of the last dose NSAIDs in the system (she gets it only once a day with dinner) might do in combination with the unhappy stomach or whether it contributed to it.

We do have Pepto Bismol in the house for me, but I'm not comfortable using that for dogs on a good day and it would be PARTICULARLY BAD idea now that she's on the NSAIDs.

Aspirin (which is in Pepto Bismol) and NSAIDs DO NOT MIX.

Since we just picked stomach protectant that day, I went to check out what it is and whether it could be helpful. But no. We used to have Zantac (antacid) at home for Jasmine but right now we didn't.

Then it occurred to me that we have a calcium/magnesium supplement I've been taking.

It has nothing in it just calcium, magnesium and a bit of zinc. At one time I was adding that to Jasmine's food. Some antacids, such as Tums are just calcium carbonate.

It was safe and worth of try. I had hubby pill it to Cookie because even though she normally takes her pills wonderfully in some cream cheese or other foods, she wasn't taking anything and I offered all types of attractive foods and treats.

So hubby pilled the supplement to Cookie. If the upset was indeed just from too much acid, this could help.

Not even ten minutes later she was hungry!

I couldn't believe how quickly that worked. As soon as it hit the stomach it must have dissolved and made the stomach happy immediately. Cookie was ready to clean out the kitchen.

Upset tummy from too much acid build up? Seems that any ol' calcium will do just fine.