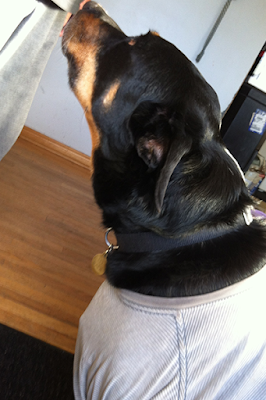 Is it a guy thing to be horrible about being sick or about their wounds? It's certainly a guy thing with men and as far as I can tell boy dogs are no better.

Jasmine had a number of major surgeries and taking care of her incisions was a walk in the park. Not that she never tried licking them but watching her and reasoning with her was good enough. With my working at home and being a light sleeper, she never needed the cone of shame. When she started licking, I'd come up to her and she'd leave it alone. She seemed to understand when I explained why she needed to leave it alone.

Even when Cookie had the porcupine quill in her footsie, she could be convinced to leave it alone and when she cut her paw pad on a glass she was amazingly good about that. We only bandaged it when she was going outside and could take the bandage off when she was at home.

The girls always understood when we were trying to take care of them.

JD is an obsessive licker on a good day. He doesn't have any allergies or any other good reason for it anybody could be able to determine. Normally, that isn't a big deal, other than having everything drenched by his saliva. I wish he took up stamp collecting instead. Or something.

Once he hurt his foot a little bit on a picky weed and next thing we knew he chewed a hole in his pad. When he hurt his leg and had a bit of an infection, he would lick it until he'd cry in pain and yet wouldn't stop. That's JD.

Now he has a long incision on his chest where the skin for his graft was harvested and the wound after the mast cell tumor removal.

Of course, he was furnished by a stylish soft cone. And, of course, because the wound is way down on his leg, he can still reach it. In fact, he somehow manages insert the foot right into the cone. So a cone of shame was a total bust. We still put it on him for the night to protect at least the chest but otherwise is useless.

None of the topicals to stop licking worked either.

During the day, to protect the chest incision, he wears a t-shirt. On the foot we put a sock. Even with the cone on, the sock becomes drenched, no matter how we watch him. All you need to do is blink. Short of putting an astronaut helmet on him, I don't think there is anything that would work. We tried a few other things but it's just a nuisance for him and doesn't stop him from doing what he's gonna do anyway.

Miraculously, in spite of his best efforts, his wounds are healing.

For his chest incision, we revived Jasmine's vet's idea of using Preparation H. He recommended that for one of Jasmine's incisions that didn't want to heal as fast as it should after her knee surgery. He said that it works wonders and does a much better job at that than its original intent.

So that's what we put on that one. The problem is that quite a chunk of skin was removed and the remaining skin was pulled to close. There has been quite a bit of tension in that area trying to pull things apart. JD's stitches had to say in for longer than typical 10 days for that reason.

Right now, though, most of the incision looks healed and there is only one small spot still feeling the tension. Overall it looks like he might be able to get the stitches out on Monday.

I don't think much of the graft on the leg is going to make it.

However, at least it functioned as a "living bandage," covering the wound for the time being. Because of all the puckering in the particular area, most of the stitches came apart and the remnant of the graft is just sitting in the middle as a pirate patch.

The vet saw it regularly and feels it's doing as well as it's going to.

The good news is that it's filling in with new tissue and there isn't much of a hole there at all now.

The tissue is still raw at spots but that's not a surprise given the challenges it faces all the time. I hasn't gotten infected, which is a miracle, and there was never any dying tissue stink to it either. It's nasty but healthy.

A examine and sniff the wound three times a day. A couple of days after the surgery I detected a slight, suspicious whiff of something. I contacted the vet, told her about it and asked whether it would make sense to use honey to help it heal and protect it from infection.


She agreed so that's what we've been doing. We put some of the honey, one layer of light gauze and the sock over it. We do this three times a day. Just once we forgot to change it mid-day--it was the day we got JD's pathology results and got distracted and forgot all about that. When I was changing the bandage and checking it before bed time, it already started to have a light stink of old socks - starting infection!

By morning it was all fine and dandy again. But we do have to do this religiously three times a day, particularly given how wet the sock gets in the meantime.

Once daily we take everything off and leave it open to air. Which means somebody has to sit there with him to keep him from licking the entire time. We do that with after dinner movie.

To top it all off, JD does not like to cooperate.

He does what he can to avoid his wound care and it takes both of us to tend to it. Hubby has to keep him in place, otherwise I'd be chasing him with the bandages all over the place. Girls are so much easier! Always understood when one was taking care of them.

It's no fun for anybody but it's getting there.


Side note: hubby just said that I owe thanks to JD because he makes the girls look so good! Ha, good point I guess.

Hopefully JD can get the stitches on his chest out on Monday. No much of the stitches left on the leg, maybe three or four, the rest just came apart on its own. The wound is getting there too even though slowly. I wasn't used to tending to such gnarly-looking wounds but over time I figured out when it looks good, read looking as good as it can. It's probably going to take another week or two before that one is in good enough shape to be left alone.

JD has been under house arrest but I think next week we'll start taking him at least for one of the walks a day. On leash, and with some seriously heavy bandage to protect it but I think he should be ok to get out of the house. Cookie misses her play buddy. She's also concerned about him and tries to lick his wounds for him. We are telling her that he really doesn't need any help with that. SHE listens.

Did you ever have a hard time getting your dog's wound to heal?