October 29, 2015
Recently, we found three bumps on JD. One of them was clearly a skin tag. The other two could not be identified by simply looking at them. Following the golden rule, we had them aspirated.

One of them turned out being a benign lipoma, the other, however, a mast cell tumor. 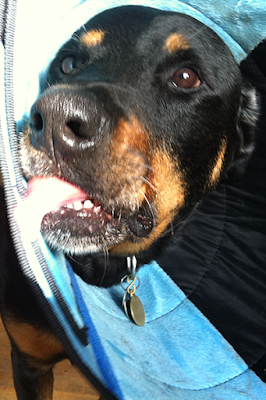 I had a basic idea what mast cell tumors are but I didn't feel it was enough now when we were actually dealing with one. I went on to do my research. One of the first things I did during that process was getting the Dog Cancer Survival Guide. It is written by Dr, Demian Dressler, DVM and Dr. Susan Ettinger, DVM, veterinary oncologist.

When the lab results came back identifying one of the bumps as mast cell tumor, I know surgery was the next step.

If everything went just right, getting the cancer out could be all that was needed.

It was still very small (size of a smartie) and not angry-looking at all, just a little inconspicuous bump. We were shooting for a cure.

The main goal was removing all cancerous tissue.

Unfortunately, cancerous cells don't come with a big tag and they don't come confined strictly to the lump itself. Getting clean margins, which means removing ALL of the cancerous cells, was going to be tricky. The rule is to cut out 2cm of tissue all around the tumor. On the tarsus, where JD's tumor was, there is very little of any tissue. If we couldn't get clear margins, we'd have to consider following radiation therapy.

We had a big debate on getting clean margins versus being able to close the wound.

Both I and our vet felt that clean margins, if possible, are the main goal, even if it meant having to do a skin graft to close.

Notes from the vet in response to my questions: "For margins, we need 2 cm around laterally and one fascial plane down. This will not be a problem. I may need to do a lateral releasing incision, but I'll have a better idea at surgery. We can also use flaps or grafts.

We will know about local radiation after the histology comes back, but at the size it is now I seriously doubt we will need radiation therapy.

If indeed we need further therapy, radiation is by far the best choice, no question.

The grading system is entirely up to the histologist, but most do either the new system or both. We will be sampling the local lymph node (popliteal) and taking 3 view radiographs (left, right and v/d) of the chest, and an ultrasound of the abdomen. They always include mitotic index in addition to margin evaluation and staging. Many will include literature on prognosis, but generally if the grade comes back greater than 2, or a suspicious 2, then I forward the case to an oncologist. They would be the ones directing the radiation regardless.

You could add turmeric, and possibly a stasis breaker formulation - I would like to see the histology first.

I do want to tell you that based on experience, distal limb cutaneous mast cells growths are by in large, MCT 1, unless they are left for years and years. This one is nice and small, and we are getting it off early. So I don't want you to worry too much until we know for sure what we are dealing with. JD needs our good energy right now! :)

Oh, and I will be pre-medicating with diphenhydramine (antihistamine) before the surgery."


Having to do a skin graft ended up being the case - skin was taken from JD's shoulder and sutured on the wound. Then the removed tissue was sent to the lab.

We did indeed achieve clean margins.

Even though JD looked like after a motorcycle accident, having a chunk of skin taken from his shoulder and implanted onto the would on his leg, even though it all looked very nasty and unhappy, and even though it's still healing, I believe that getting clean margins was well worth it, particularly as it turned out being grade I tumor, for which complete excision can be all the treatment needed to achieve cure.

All the cancer was removed.

JD also got x-rays, ultrasound and a lymph node aspirate to see whether there were any further signs of cancer other than the lump itself. All this was done before the actual surgery because if it was found that it has spread, we might not have attempted the surgery in the first place. All of that looked clean.

We are done for now.

We got it all out, it was grade I and mitotic index was 0. Of course, we'll keep checking for any future bumps and continue semi-annual wellness checks.


Related articles:
It's That Time of the Year Again: Annual Wellness Exam and JD's Bumps
JD's Biopsy Results Revealed Mast Cell Tumor: You Don't Know What the Bump Is Unless You Look at the Cells
See Something Do Something Cancer
JD's Mast Cell Tumor: Surgery and Pathology Report

Symptoms to Watch for in Your Dog: What Is that Bump?