Rabies is a highly fatal viral disease that can be transmitted from animals to people. 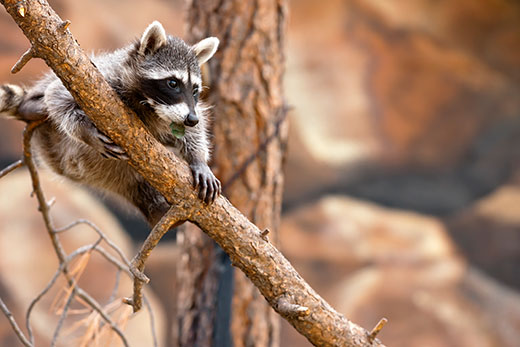 Rabies in wild animals is most common in bats, skunks, raccoons, and foxes. Because dogs and cats can come in contact with these animals when outdoors, our pets form a "bridge" between rabid animals in the wild and people. Little can be done once signs of rabies develop, so all dogs, cats, and horses should be routinely vaccinated against rabies to prevent not only this serious disease in your pet, but also possible exposure of you and your family.

The rabies virus is transmitted by saliva through a bite wound, any other type of open wound (such as a cut), or even through contact with mucous membranes (such as the eye or mouth).

The virus then travels up the nerves to the brain. Rabies can take either of two possible forms: The best known form of rabies, seen in movies such as Old Yeller and To Kill a Mockingbird, is called "furious" rabies. In this form, an animal becomes very excited or aggressive, often biting or attacking anything or anyone in its path (including its owners). Periods of excitement or aggression often alternate with quiet periods. Furious rabies is the most common form in cats, and it is also seen in many dogs. Normal barking tends to change to a hoarse croak or howl. As the disease progresses, seizures are common.

The second form of rabies is less well known. It is called "dumb" rabies, and it is associated with weakness and paralysis rather than with aggression. Many animals try to hide. Sometimes, an animal with dumb rabies simply exhibits strange behavior such as losing its fear of people, becoming unusually friendly, or wandering around in broad daylight. For example, a skunk, which is normally active at night, wandering around during the daytime is showing strange behavior and should be considered suspect.

Both forms of rabies are associated with excessive salivation (ie, "foaming at the mouth") from paralysis of the throat muscles, which makes it difficult to swallow. The pain and fear associated with swallowing anything, even water, led to the historical designation of hydrophobia (fear of water).

A definite diagnosis of rabies requires examination of brain tissue from a dead animal.

However, unvaccinated animals that bite someone can be quarantined for at least 10 days to see if signs of rabies develop.

Vaccination for rabies is legally required for all dogs, and often for cats as well. Your pet will usually get its first rabies vaccination at about 3-4 months of age, with booster shots typically given every 1-3 years thereafter, depending on local laws. Your veterinarian can advise you on the laws of your local area and state.

In addition to making sure that your pet is vaccinated against rabies, you can take several common sense measures to protect both your pet and yourself, including the following:

It's also important to know what to do in the unfortunate event that you are bitten (by any animal). For any bite, you should immediately wash the wound thoroughly with large amounts of soap and water, and then seek medical attention right away.

If you have been bitten by a wild animal, you should also report the bite to your local health department and animal control agency. If you have been bitten by a dog or cat (that is not yours), you should obtain as much information about the animal as you can, including a description, its license number or identification, the owner's name, address, and telephone number, and the rabies vaccination status whenever possible.

Visit WebVet for a wealth of information about the health and well-being of pets. All medical-related content on WebVet has been veterinarian approved to ensure its timeliness and accuracy.