All From a Tooth Abscess? "Help, Roxy Fell"

July 14, 2015
I haven't shared Roxy's story yet. Mostly because of the unfortunate way things played out; ending without answers or resolution. But sometimes things do turn out that way.

Roxy was our first Rottweiler. 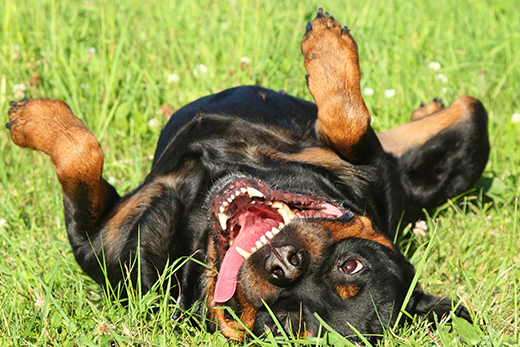 Hubby rescued her at a gas station. She spent her first years traveling across the continent in his truck. She was the one who gave a seal of approval to our relationship when Jerry and I met.

Every year she got a veterinary check-up and vaccinations.

This was long before anybody raised any issue with annual vaccinations.

We fed her the food we could afford. I was new in the country and hubby was after a nasty divorce. We were struggling financially.

In spite of that, she was healthy other than her frequent deadly gas. She had diarrhea about three times in all those years, each just one-time event. She was about nine years old when things went wrong. It was a Sunday afternoon.

I was working when hubby called out of the living room, "Help, Roxy fell!"

I came rushing over but Roxy was already on her feet again. She looked normal. We encouraged her to walk back and forth and nothing seemed to be wrong.

It wasn't a satisfying explanation but given that everything seemed fine, it was the only one we had. The rest of the day went on as if nothing happened. Perhaps she tripped after all?

In the middle of the night I woke up to her whimpering. Hubby checked her all over but couldn't find a source of pain. But something was bothering her.

First thing in the morning he took her to a vet.

They examined her and told us she had an abscessed tooth. "Perhaps she fell from the pain," was their explanation for the strange event from the day before.

Roxy got antibiotics and a follow-up appointment.

By now she really looked unwell.

She'd eat only when hand-fed and looked miserable. She also fell couple more times. It was now clear that she didn't trip but stumbled because her leg gave out on her. She would get herself in awkward spaces and fall and get herself stuck in there. We kept trying to keep her resting where it was safe. The falls happened more and more often and her legs seemed weak.

We called the vet telling them what was going on. They concluded that it was from the abscess and perhaps also from the meds. Once the antibiotics kick in, things should improve.

We babied her as well as we could.

She slept ok through the night. In the morning hubby left for work; he was commuting at that time. It was just me and son who were at home.

Roxy looked really unwell and I'd prefer him staying at home but he couldn't.

She laid there, her whole body convulsing, mouth foaming. Her regular vet was all the way across town and we didn't have a safe vehicle to get there. We found a hospital just down the road from us and called asking them to see Roxy as an emergency, explaining what was going on.

They told us that they didn't accept emergencies unless it was their own patients.

It was Tuesday, the hospital was open, there were doctors there but they refused to see Roxy because she wasn't their patient ... ?

We didn't have a choice then. We called Roxy's regular vet, telling them what's happening and that we were on our way. We took the van that was available, however unsafe, hoping it wasn't going to break down before we got there.

Roxy was so weak she couldn't walk more than couple of feet before collapsing.

We carried her into the van. She was also peeing involuntarily, which seemed to make her unhappy but there was no helping it.

We did make it across town and I ran to the vet's office asking whether they could help us carry her in. "She cannot walk?" they asked. No, not really.

They helped us get her in and a vet came to tend to her right away.

She peed again on the exam table as she was laying there, then got what looked like another seizure. The vet examined her, took her blood, left a couple of times and came back again. Her expression wasn't conveying much hope.

She said that it would take at least $500 to maybe figure out what is going on. Maybe figure it out but no guarantee it can be fixed.

Neither of us had any credit either. If we knew that the expense would make Roxy well again, maybe we could figure something out. But there was no guarantee.

However Roxy loved me, she was hubby's dog. He was the one who needed to make the decision what we'll do.

The vet was on the phone with him for a long time.

The decision was made to let Roxy go. They sedated her so we could say our goodbyes. And then it was over.

We never found out what truly happened. Was it the infections from the abscess making its way to the brain? Was it something else all together? Was there something that could have been done?

Roxy had a good life.

She was happy and lived about the average life span for her breed. We had barely enough money to put food on the table (and into the bowl), we couldn't afford spending money just to maybe find out what's happening. We did the best we could then.

I hope Roxy and Jasmine have met OTRB and have a great time together.

It was a very long time ago but it still bothers me. But sometimes you can only do what you can do. Roxy was well loved and she knew it. She loved being with us. And then the time came we had to let her go free.