Things Are Not Always What They Seem: Sam's Mysterious Lameness

June 16, 2015
When a dog suddenly becomes lame, sprain, strain or an orthopedic injury are the first things that come to mind. 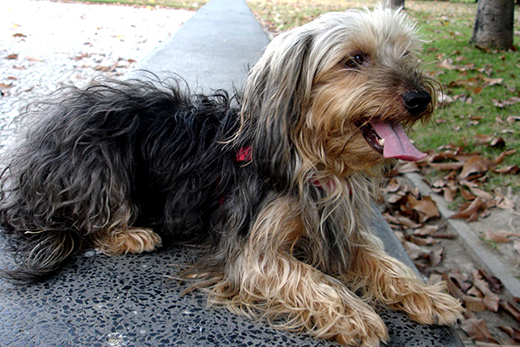 Particularly after a lot of running, play or other high level activity.

On the second day with us, Cookie went for a morning walk, ran a played, very enthusiastically, like she always does. At one point she yelped, stopped and favored her leg a little bit. Than she returned to running.

Must have stepped on something that pricked her paw, we figured.

As she paid no further attention to it, we thought that was that.

Then we were on the patio and Cookie was resting. It was a hot day. Yet, I figured she was resting too quietly, too long.

When she did get up, she wouldn't put any weight on her hind left leg.

We did recall the morning incident and checked her foot thoroughly. There was just a tiny little spot on the foot, which just wouldn't explain why she was so lame. Could it have been a bee sting? There was barely anything visible.

We ended up thinking that was just a coincidence and that she must have busted her knee because that's what the way she was carrying her leg up to her belly looked like.

And yet it turned out being a chunk of a porcupine quill, embedded in her foot, likely from her last encounter before we got her.

I'd swear her knee ligament was gone.

Sam became lame after jumping out of a car. He yelped and wouldn't put any weight on the leg. His parents checked the entire leg but didn't find anything out of place.

Sam wasn't using the leg the next day either.

Something more serious than a mild injury was going on. Sam got examined at the vet. Joints flexed and extended, whole leg palpated ...  The only time Sam yelped and pulled his foot away was when his foot was touched. X-rays didn't reveal anything.

While Sam was under sedation for his x-rays, it was possible to examine the foot more thoroughly. There was a tick, hidden under long fur.

Could a simple tick be the cause of all that lameness?

Jasmine only had couple of ticks through her lifetime, mostly she wasn't even aware of it. Once, though, the tick got her ear. We found it right away because suddenly Jasmine started yelping, carrying her head low and tilting it to one side. We immediately examined her and that's what we found - a tick stuck to her ear flap. Clearly, it must have been very painful.

As it turned out, Sam's tick was the culprit too.

The area where the tick was attached was the bit that was so painful, causing Sam's lameness. Usually dogs don't even notice having a tick. But as it seems, every now and then it just bites the wrong spot. Did the tick attached right at a nerve ending? Did it introduce some infection causing aggressive immune reaction?