May 26, 2015
We knew something wasn't right but we didn't know what and the frequent vet visits weren't providing any answers or solutions, other than temporary relief. 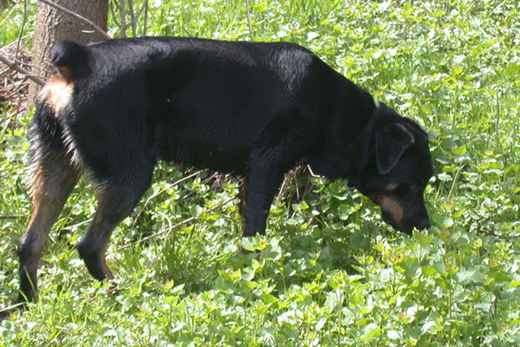 Usually, though, she didn't go to the bathroom more frequently than would be normal. We thought that was a good thing. We thought that since she went only two to three times a day. We thought it wasn't really diarrhea, just loose stools.

That would go on for a while, followed by frequent potty calls during the night.

That was usually when we went to the vet, yet again.

At least that was what we were told. I never saw those results then and I wouldn't have known what I was looking at if I did. Stool samples didn't show anything either, not even the elaborate "collect tiny bits of poop into this container for a week" giardia testing.

Did she actually have giardia at some point? None of the testing showed anything.

The antibiotics did help. Jasmine's stools would firm up after couple of days of taking them and remained firm throughout the treatment. Sometimes even a while after the treatment. And then they would start softening again.

At that time we had a lawn in our yard. But trying to clean the loose stools from the grass was a major challenge. Between that and the fact that Jasmine's urine would systematically kill the grass, we decided to give up on the lawn and covered the yard with wood chips instead. That made it easier to keep the yard clean.

Slowly but surely Jasmine was getting pickier and pickier with her food.

She started refusing her breakfast all together. Which would be fine, I guess, except the times when she was yet again put on antibiotics which she was supposed to take with a meal, and yes, in the morning too.

She really didn't want to have anything to do with food in the morning. I imagine her belly was feeling crappy. Getting the antibiotic without a meal would make her feel even crappier.

But she just didn't want to eat.

One thing we could almost always rely on was, that for some reason, she always felt better once she got out on a walk. So in order to get her to accept a meal to go with her meds, I'd get up at five in the morning and take her for a walk. After that, she did eat and could get her meds safely.


As time went on, it became more and more obvious that the antibiotics were only a temporary patch.

Knowing what I know now, I would have done things very differently. But back then, all I knew was to take my dog to a vet.

Jasmine's relationship with food kept deteriorating. Often she wouldn't want her dinner either. Her belly would start making all kinds of noises and she'd refuse even the yummiest treats, such as boiled chicken breast, even steak.

The only thing that seemed to always work was a good long walk.

Sometimes she'd throw up some bile, sometimes she wouldn't. But about half way through the walk to stomach got quiet and she started being interested in treats.

I got a premix and was adding home-cooked meats just to get her to eat at all. And still no answers.

Most of the time, other than her disinterest in food, things didn't really seem to affect her quality of life. She loved her walks, she loved to play, she looked happy.

Othen than the days when her stomach was clearly not feeling well.

Those times she'd be visibly uncomfortable, drooling and wanting to eat grass. Yet, even on those days, a good long walk seemed to help almost every time.

At least not as far as anybody could tell. She was muscular, energetic and full of zest for life. Perhaps I did manage to get enough nutrients into her after all.

And probably also one of the reasons why the vets weren't taking this seriously enough.

I can't believe that this has gone on for five years without a diagnosis.

I would have never let things go on for so long now. But back then I just didn't know better. When the vets kept saying that she just had a sensitive system, I accepted it at that.

Today I would most certainly want to know WHY.

If her system was sensitive, why? Sensitive to what? There is a reason for everything. Where there is smoke, there is fire. And there literally was fire in her belly.

I was happy to finally have a diagnosis. I was not happy that it took so long. And even then it was mostly a coincidence. Looking for a vet certified in stem cell therapy, finding one who wanted to x-ray her whole body and in the process discovering the problem.

If your dog is having any kind of a chronic problem, do insist on definite answers.

There IS an answer to everything. It's just a question of finding it. No diagnosis is as scary as having a problem that keeps getting worse and nobody know what to do about it.

However long it took, Jasmine's diagnosis came before things got REALLY bad.

Yes, I believe it was at a root of a number of other problems, but it never brought her to the brink of death. And IBD can get that bad. You can go and read Leroy's story to learn how horrible IBD can get.

If your dog is really in trouble, having life-threatening symptoms, it is an incentive to get answers. But if the problem is coming on slowly, doesn't really seem so bad,  it begs to be dismissed. Don't.

Don't dismiss the problem and don't let your vet do that either.

"A man can get used to anything; even a noose,"
my granny used to say. 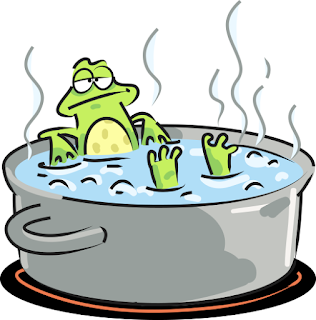 Just because he doesn't know he should jump out, it doesn't mean it won't kill him.

Yes, all the experiences with Jasmine made me very paranoid about any warning signs I might see in my dogs. But I do believe that it is better to be too paranoid than not paranoid enough.