Symptoms to Watch for in Your Dog: Vomiting

February 19, 2015
Nothing gets an owner moving faster than the sound of their dog heaving. If you're lucky, you manage to let your dog out in time. Or you might come home from work to a puddle of vomit by the door. 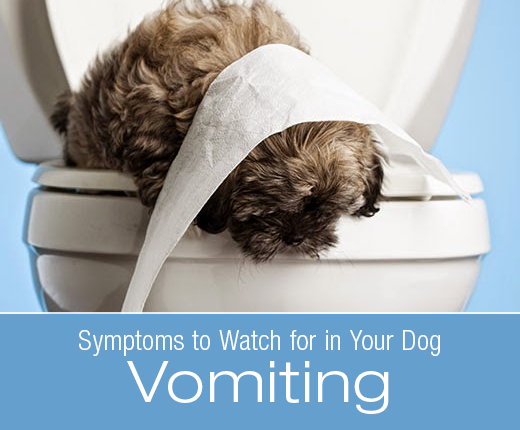 Dogs are built to vomit.


Which is a good thing, considering the kinds of stuff they get into. If something doesn't sit right after it's gone down, back out, it comes. That is a good thing, particularly when there is a clear reason you can either think of or discover in the vomit itself.

The signs of impending doom might include your dog drooling, licking their lips (or the furniture, the rugs, themselves) and swallowing excessively. Some seek to eat grass.

If my dog vomits just once, looks and acts normal, and I can put my finger on the cause, I don't get overly worried.


Things my dogs threw up over time include dead mice, pieces of sticks, rocks, pieces of plastic, a sock (we really dodged a bullet there), grass, and horse poop mixed with hay .... Yes, I do worry when I find assorted inedible items in the puke. But as far as I can tell, it all came back out and didn't cause further trouble.

I don't encourage my dogs to eat these things, but I can't watch them every second of every day either.


“Drop it” or “leave it” commands are great if you're at the right place at the right time. But this had even backfired on me when Cookie discovered that grabbing sticks is a way to acquire more treats. She'd drop one and accept her treat only to turn around and grab another one. Eventually, it turned out that ignoring her stick-grabbing behavior was more successful.

With inedible items, you have to worry about obstructions or perforations.


This was one of the reasons we got pet health insurance. Having a lot of free time outside, it is inevitable that the guys will ingest something inappropriate from time to time. As long as it safely makes its way back out, you're in the clear.

If your dog keeps vomiting and/or exhibits signs of distress, it's time to be on your way to the vet.


Signs that you should call your vet include:
While there is a serious gross factor involved, examining your dog's vomit might give you important clues as to what's going on. See article What's in the Vomit.

Dogs do seem to conduct scientific studies on the edibility of almost everything in their environment, but it’s important to remember that their vomiting might have nothing to do with what they recently ate.

While vomiting is often caused by a problem in the GI tract itself, the issue might be originating somewhere else altogether.

Problems within the GI tract that cause vomiting include:
Problems outside the GI tract that can cause vomiting include:
If JD or Cookie vomits something inedible, acts normally and is hungry, I might not even withhold food and let them eat shortly after. I leave it up to them whether they want to eat or not. Our guys are usually good at making the right judgment about that.

If you pay close attention, your dogs will tell you how ill they feel.


With her IBD, Jasmine threw up fairly frequently. She'd refuse food, her stomach would make gurgly noises and eventually she'd throw up some bile. Shortly after she'd start feeling better and look for food.

When Cookie got a bout of pancreatitis, she vomited only once, and we were on our way to the vet. Why? Because she was looking sick even before she threw up. She was refusing food and looked tired and lethargic. When she threw up, we thought that getting it out of her system was going to make her feel better. But because it didn't, we didn't wait any longer.

Know when it's an emergency


Projectile vomiting, vomiting repeatedly, trying to vomit but nothing coming out, blood (whether fresh or digested) ... mean you need to see a vet ASAP.

A vomiting dog who is lethargic, weak, shaking or otherwise obviously in distress, needs to see a vet immediately.


With severe vomiting, your problem isn't only the underlying cause but also the dehydration, acid-base imbalances and electrolyte disturbances caused by the vomiting.

Waiting too long before seeing a vet could even be fatal.


Related articles:
What’s In the Vomit?
Why Examine Your Dog's Vomit?
One Vomit, No Vomit
What Happens in a Dog's Body with Severe Vomiting?
Grocery Bag Is Not An Open Buffet: What Was In JD's Vomit
Causes of Vomiting in Dogs
The Gross Factor: When A Dog Vomits In Your Hands