Symptoms to Watch for in Your Dog: What Is that Bump?

February 12, 2015
"Can anybody tell me what that bump/lump/swelling is on my dog?" This is one of the most frequent questions owners ask… some include a photo and some figure a description should be enough. 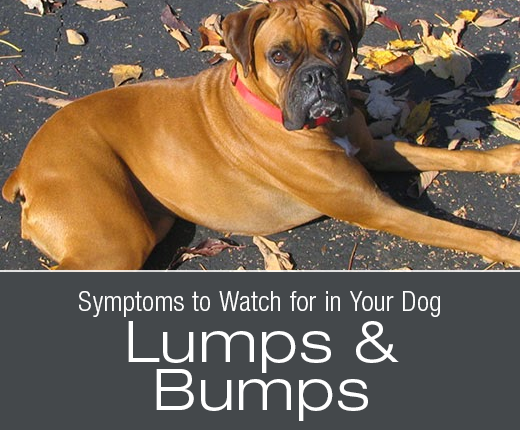 For sure, they get kudos for finding the bump.

That is the most important step - discovering the bump/lump. That is also one of the reasons why regular grooming, brushing and running your hands all over your dog's body is a vital part of their care.

The second most important step is having it identified.

And they realize that, which is why they post to ask about it or search online photos. But is that the right way to go about it?

Firstly, many of the online photos that might look like the bump you found on your dog are mislabeled. Even if you find one that looks exactly like what your dog has, there is no guarantee that it is what the source says it is.

Secondly, just because the photo does look right and assuming it is labeled correctly, it still doesn't mean that is what your dog has.

With rare exceptions, nobody, not even a board-certified oncologist, can identify a lump just by looking at it.

A lump/swelling that suddenly pops up can be causes by a sting, bite or an infection. This may or may not be an emergency but requires veterinary attention unless it disappears on its own within a day or two.

Most lumps and bumps have likely been there much longer than you think.

They are particularly hard to find when they are tiny. But even a large lump can go unnoticed. When we adopted Bruin, he got his initial thorough vet exam and nothing was found amiss. Yet I thought his chest looked weird. Nobody else agreed, saying that's just the way his chest looks (he was a big boy.) It wasn't until one day at the farm when hubby called me all panicked that Bruin has this HUGE lump that appeared all of the sudden.

It was size of a baseball, it did not just appear over night.

What happened instead is that it was sitting there the whole time, evenly distributed across the chest. As Bruin started to thin out, it must have gotten lose and moved to the side. NOW it was really obvious. Fortunately it turned out to be a lipoma.

Finding a bump on your dog is scary and denial is tempting.

But denial never cured anything. The best policy when you find a bump is to have it examined AND identified. If it is harmless, great, at least you know. If it isn't, at least you can do something about it. The sooner it gets treated, the better.

Dr. Sue Ettinger, veterinary oncologist, launched a campaign to educate owners as well as veterinarians, to raise cancer awareness and promote early detection. The simple rule is that if a lump on your dog is the size of a pea or larger, or it has been there for a month, get it checked.

Having it checked doesn't mean your vet taking a look and proposing the wait and see approach. Wait for what? Cancers grow and spread?

When I found a tiny lump on Jasmine's nipple, we took her to the vet right away. He was reasonably sure it was an infection and a short course of antibiotics cleared it right up. But we did SOMETHING.

Breast cancer in dogs is quite common and aggressive.

If this had been cancer, catching and removing it early could have been the difference between life and death.

Lumps and bumps on dogs range from pimples, warts, abscesses and histiocytomas to fatty tumors, mast cell tumors and many other cancerous growths.

Cutting out a mass without knowing whether it is benign or malignant means that either more tissue will be taken out than needs to be if the vet plays it safe, or worse, not enough tissue will be removed and cancerous cells will be left behind. This only results in more treatment and more risk to your dog.

Also make sure your vet doesn’t throw away the mass once it’s been removed. Always have it sent to a pathologist.

Why? The pathologist will confirm the type(s) of cells involved in the growth and note whether the entire mass has been removed. The key word here is clean margins - making sure ALL potentially cancerous cells are gone.  If some have been left behind, more treatment will be necessary to prevent or delay the mass’s return.

More than half of lumps and bumps are not cancerous.

That is somewhat comforting but don't take a gamble on a guess. The best policy is to have every lump/bump/swelling that is the size of a pea or larger, or been present for a month or longer, properly identified.

Did you ever find a lump on your dog? Share your story.

Related articles:
If It's Got To Be A Lump, Let It Be Lipoma
Mammary Cancer: Mia's Story


Further reading:
How confidently can you diagnose your pets "bump" by a photo online?
Causes of Solid-Appearing Lumps & Bumps on the Skin of Dogs
Lumps and Bumps on Dogs
Five common mistakes with cancer surgery
Mass Removal – Important Things To Know Before Surgery