February 24, 2015
Brewing medical issues don't always come marching in with a huge nobody-can-miss banner. Often the signs can be very subtle, such as a change in behavior or routine. 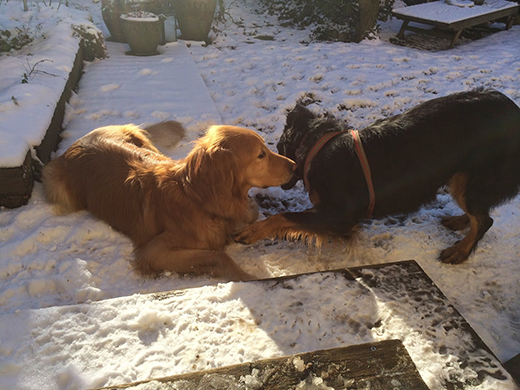 In Kenzo's case, the only sign that something has changed was the fact that his house mate started bullying him.

Not really that surprising as she is young and always testing the boundaries. It was the fact that Kenzo suddenly let her get away with it that was suspicious.

If your dog starts acting differently, start with a vet visit.

Kenzo's tests came back all negative, which was great but didn't explain the change. It was discovered, though, that he had some mild arthritis in his front left leg.

Indeed, a couple of days on pain killers got him back on track.

Next time his house mate tried to boss him around, she got told and normal course of things was restored.

Kenzo was started on long-term arthritis management, including supplements and acupuncture.

But that was not the end of it.

Even before it seemed that Kenzo's voice was changing. His bark sounded more hoarse. His lungs and heart checked out and it got dismissed.

As his arthritis pain got better and he became more active again, it became quite clear that his breathing wasn't quite right.

With everything else ruled out, the only diagnosis left was laryngeal paralysis.

Larynx, or the voice box, is part of the respiratory system that regulates the passage of air into and out of the trachea and allows vocalization. It controls the air flow and keeps food out of the windpipe. With laryngeal paralysis, the muscles that open the larynx begin to lose their ability to function normally. That, among other things, results in difficulty breathing.

It's been deemed idiopathic in origin. However, according to Bryden J Stanley, Associate Professor, Surgery Section Chief Michigan State University Department of Small Animal Clinical Sciences, it is all part of a bigger neurological problem. To better describe the condition, it was renamed to Geriatric Onset Laryngeal Paralysis Polyneuropathy (GOLPP).

To make a definite diagnosis and decide whether surgery is a good solution for Kenzo, it would require consultation with a specialist. They are searching for a specialist or a vet with extensive experience with this condition.

How much testing should Kenzo be put through in order to confirm the diagnosis?

That is always an important question. The only time it makes sense to put a dog through such an ordeal is when the results would positively affect the treatment and prognosis. If further diagnostics aren't going to change what you're going to do, why pursue them?

The current plan is to go with the working diagnosis of GOLPP--adjust Kenzo's routine and start physical therapy.

There is no sense in losing valuable time and quality of life when further diagnostics won't change anything.

Source articles:
Nothing To Show For
About Laryngeal Paralysis, Idiopathic, and GOLPP