I met Palmer two years ago when she arrived with her mom and siblings fresh off a transport vehicle from a high kill shelter in the south. 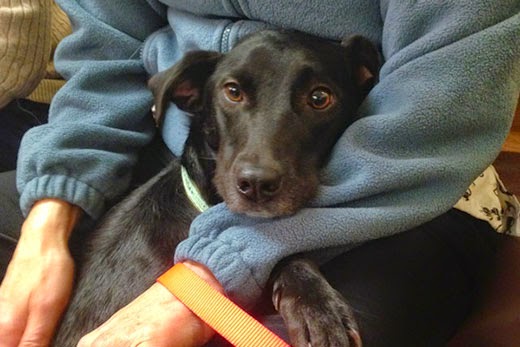 She was one of the many rescue kids we see because we work so closely with Black Dogs and Company Rescue. She happened to be walking into the examination room as my friends were visiting me in the front reception area. Within about 30 minutes of arriving at our clinic she was in my friends arms and on her way to her new home.

Palmer was in the clinic almost weekly at first as we struggled to get her up to date on her vaccines,  get her nourished, de-wormed and used to being on a leash with a family. We spayed her a short time later and she was the little black shadow who went everywhere with her busy family. I saw her, and spoke about her often.

On Saturday November 8, 2014  I got a call from Palmer's concerned mom

Palmer had vomited a few times, was panting and was lethargic.

I asked if she had gotten into anything? Or had been injured? They assured me that she hadn't. I was getting ready to go to a dinner party and told them that I thought she should be brought to the emergency room. They elected to continue to monitor her through the night and wanted to bring her in to see me in the morning. At 9 pm I received another call that she had worsened and they were on their way to the ER. At 11 pm I called to check on them.

She was critical. An x-ray of her chest was taken and showed that she had blood in her chest. She was placed in an oxygen cage to help her breathe better. I spent the next hour talking to them and the ER vet. It was a clear reminder of how frightening and fragile life is. The ER gave Palmer's family a $3,000 estimate and wanted a deposit. They couldn't afford this. 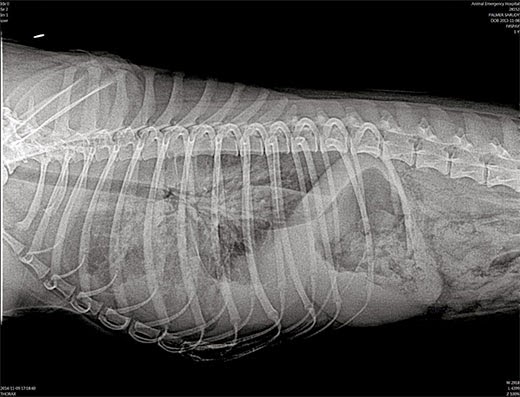 So Palmer's life was left hanging on an x-ray and a list of possible etiologies.

Hard as we tried we couldn't get her history to fit a likely scenario. This is where an experienced ER vet, a diligent devoted and observant family, and a pet with a complete and accessible medical record make all of the difference in the world.

Her family left her at midnight to see if the conservative plan of oxygen, fluids, and time would help. At 8 am Sunday morning I called back to check on Palmer. Her family was electing to euthanize her because they couldn't afford to do all of the diagnostics the ER was proposing to try to diagnose her. They wanted to bring Palmer to me at the clinic to look at her. I was sad, frustrated, and my typical stubborn obstinate self. "Please don't bring her to me so I can kill her." It was a selfish thing to say. But I meant it. I told them that I was going to do whatever I could to save her. I meant that too.

I tried repeatedly to get some clue as to what had happened to her that could have caused this.

They reassured me over and over that it couldn't be a toxin, or trauma. That left a few bad, and likely untreatable, scenarios left.

I called the ER again and spoke to the vet. We both knew that Palmer's family was leaning toward euthanasia. Together we talked about Palmer's case. The ER vet hadn't run any diagnostics outside of an x-ray because her family had declined them due to cost.

If Palmer didn't get a diagnosis quickly AND cheaply we believed she would die.

It is a terrible real-life predicament.

"OK," I said to the ER vet. "Palmer is 3, it is probably not a tumor. And, even if it is we can't treat that. (Too expensive and very poor prognosis). There is no evidence of trauma. Just run a PCV/TP and a coag(ulation) profile. That's the only real possibility that is treatable."

Ten minutes later, and for less than $100, Palmer had a diagnosis; Rodenticide poisoning.

She was bleeding into her chest from ingesting rat poison. Her family did not use it, and she had no known access to it, but it was inside of her and killing her. She was immediately started on vitamin K.

A few  hours  later she was still critical and still fighting for her life.

Her parents called me again and I opened my big mouth, again. "She needs plasma." The ER's price for this was $600. "I'll give you mine or pay for what she needs." A day later Palmer left the ER wagging and happy.

She made a full recovery in a few days.

Turns out she had gotten an animal carcass from the mulch they had delivered two days before she fell ill. (Don't use rodenticides anywhere. Please! .It kills more than rats every single day. There are more humane methods to keeping pests out of your house. (My favorite.. 4 cats!)).

Two days later she came to give me a hug at the clinic. I live, and work, for those hugs.

She changed the way I am accessible to my clients.

I called the two emergency clinics that we refer to and asked them to call me if one of our pets was there and was being euthanized because of cost or uncertainty. I can't change fate, disease, or the fact that medical care can be expensive, but I can change that powerless fear that many people euthanize over. Or, at least I can try.

If you have any  thoughts on Palmer's story I would like to hear them.

Please leave a comment below, or you can find me on Twitter @FreePetAdvice, or at the clinic, Jarrettsville Vet, or on Pawbly.com. Pawbly is an open online comunity for pet people. Our goal is to empower you, educate, and assist you in taking the best care of your pet as possible. Pawbly is free for everyone to use and open to all pet lovers.