December 02, 2014
Living out in the bush, there isn't much of conventional garbage to get one's nose into around here. However, there are enough attractive forbidden bits such as the mess either predators or hunters leave behind. Various innards, chunks of carcasses ... And, of course, a steady supply of a broad range of poop starting with bunny droppings and ending with deer and moose. 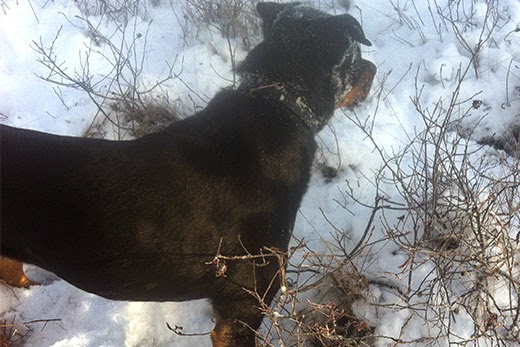 We typically discourage the guys from feasting on this stuff.

Mainly because often there is no telling how old it is, and it some cases, how the animal or bird died. I always tell Cookie to stick with the fresh prey, one that she just got.

We can only stop them from eating these things when we see them to do so.

And sometimes not even then, when it's small enough.

One way or another, JD must have managed to snack on something nasty.

Saturday evening he started with a pretty bad diarrhea. Almost as soon as we came from the outside, he was asking to go out again. What the heck did you eat, my friend?

Considering what was happening, it looked like large intestinal diarrhea.

He wanted to go about every half an hour, in a hurry. Often there was quite a bit of straining before anything came out. When it did, it was nasty liquid, eventually mixed with mucus.

He seemed fine otherwise, didn't look sick in any way. Wanted to eat but that was a tough luck because he had to undergo a 24-hour fast to let things settle down.

As far as acute diarrhea goes, large intestinal diarrhea is the better of the two possibilities.

For the most part, it doesn't interfere with nutrient absorption. The potential causes are garbage gut, of course, parasites or bacterial causes. All much better problems that those behind small instestinal diarrhea.

The first night was the worst.

Out at least every hour or so, even though eventually there wasn't really anything to come out of there.

After the 24-hour fast JD got his bland diet of chicken breast, rice and pumpkin. I also added some pro- and pre-biotics. Since the tummy had time to rest and was pretty much cleared out, the next night was easier even though there were still a few trips.

Diarrhea from a garbage gut should resolve in about 24 hours.

It was Sunday, of course. The vet was closed and this was not an emergency. So we continued with the bland diet, probiotics, and hoped for the best.

It was also time for heartworm prevention. At first I though that I'd put it off, not to tax the body that was already busy enough dealing with one problem. Given the fact that the one we use is also supposed to treat roundworms and hookworms, though, I changed my mind and decided to give it to him just in case it was going to help.

The stools started improving the next day.

Hopefully, whatever it was, the body dealt with it. Today JD's stool was still a little on a soft side but well formed.

He's back on his normal diet and hopefully it's all over.

If not, he's gonna have to have his stool checked to look for the culprit.

As if we didn't tell him enough times to eat only things we give him. But with the open buffet out there, the temptation is great.

Related articles:
Grocery Bag Is Not An Open Buffet: What Was In JD's Vomit
JD's Turn To Be Lame And The Difference In Personalities
Judging A Mouth By Its Cover: There Is More To Dental Health Than Meets The Eye
JD's Leg Injury And Hip Dysplasia
Should We Go With The Total Hip Replacement?
JD's Injury And Bad Hip Update