Abby was an Australian Cattle Dog. She was a strong, solid, short and stocky powerhouse. Her grey merle coat was short and flat and impenetrable except for a ridge of wavy hair that ran down her spine. She had a broad wide face that set her kind gentle eyes as far apart as possible. As solid and formidable as she looked she was always docile and loving. She was never an overtly affectionate dog, but she was sweet and gentle and for as much pain, suffering, and struggling as we put her through she never became curse or angry. 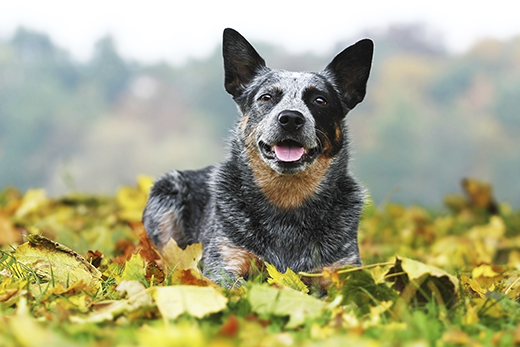 That day she came in because her dad had noticed a “lump on her belly.”

It “lump” turned out to be a mammary mass. Mammary tumors, or pyometra (uterine infection), occur in almost every older intact female.

I spayed Abby and removed her mammary masses.

The biopsy results came back as an Adenocarcimona and her prognosis from the pathologist was listed as “guarded.” In typical Abby fashion she healed very well from her radical mastectomy and ovariohysterectomy.

Five months later her dad backed over her in the driveway.

I would say that the most common “hit by car accident” I see is an owner backing over their own dog.

The accident ripped all of her skin off her belly. It looked like someone had sliced her skin from armpit to hip and peeled it to the opposite side.

I immediately put her under anesthesia to see if her abdominal wall had been jeopardized because that would require immediate surgical intervention.

I had to clean and explore this massive wound before I could even give her dad any kind of estimate as to what her care would entail. I brought him back to see her once she was under anesthesia and I had figured out what tissue-was-what.

I needed him to understand the severity if her injuries, and I also needed him to sign on for the very long, painful, intense road ahead.

He was shocked to see the full extent of the damage he had caused. He asked me if I thought she would survive? I told him that I was encouraged by Abby’s determined arrival. When Abby arrived with that terribly atrocious looking wound she was standing up on all four legs in the back of his pickup truck. I thought that if she arrived looking that good, then as long as I could minimize her bleeding I expected her to leave here standing back up in the back of his truck (although I do cringe and beg every owner not to transport their pet this way, so dangerous!).

After three hours of surgery I had her roughly sewn up Frankenstein style.

Not pretty, but functional. I knew that this was not going to be a single surgery fix, because I knew I was going to see some of this tissue die off over the next few weeks. I also knew my biggest immediate challenge was to first control her hemorrhage, then try to beat the massive infection that getting cheese grated on asphalt causes.

Abby came off the table looking like a corseted, girdled, 18th century call girl. She was shaved, bloody, bruised and barely able to move. She needed daily sedation to change the voluminous blood soaked bandages, and mega doses of morphine to control her severe pain. Her dad visited everyday.

It took 1 week of constant bandage changes, very careful blood monitoring, (because she lost so much blood and valuable protein). Even after the wound was pseudo-closed there was still seepage of blood and protein. It is the same seepage as you get when you skin your knees.

We had to keep her bandaged for weeks.

Those bandages, though, turned out to be incubators for more infection.

Abby returned smelling like rotten fish. It was powerful enough to make you blink and run away. The funny thing was that he dad brought Abby in because she wasn’t eating, I still don’t know how he missed the make-you-want-to-puke smell.

Her whole belly was one huge festering swamp of infection.

It was so severe that we had to re-hospitalize her.

When the infection was under control I had to put her back under anesthesia to close her wounds and cut away the dead skin.

It took two more surgeries and a whole lot of TLC to get all of her parts back together again.

But Abby met every obstacle head on. She was a valiant strong-willed determined dog.

On her examination my associate found that her pink color to her gums was gone. They were now white, and her x-rays revealed multiple masses in her chest.

Her mammary tumors had finally caught up with her.

As sad as it is to say to such an old dear friend I know that 1 year and 9 months is a very long time to have when your prognosis is considered “grave.”

If you have a question, concerns, or just want to share your pet knowledge with our pet enthusiasts please visit Pawbly.com. We are a free pet community with a big heart.