Cushing’s disease, named after the first physician who reported it, is caused by an excess of cortisol in the body.  It is most common in middle-aged to older dogs, especially poodles, dachshunds, Boston terriers, boxers, and beagles. 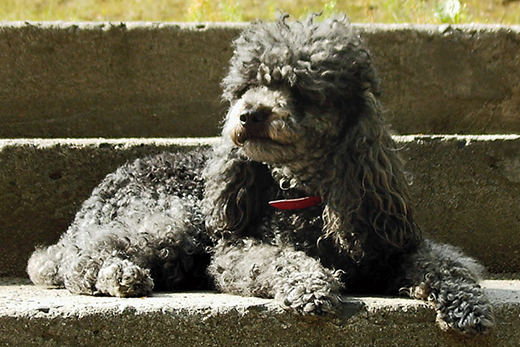 Cortisol is a corticosteroid hormone that is involved in metabolism and response to stress.

It is produced by the adrenal glands, which are found on top of the upper part of the kidneys.  The adrenal glands produce cortisol in response to another hormone that is secreted by the pituitary gland.  The pituitary gland, which is found in the brain, is called the master gland because it secretes a number of hormones that act elsewhere in the body, telling other organs to release additional hormones.

A tumor in either the pituitary gland or the adrenal glands can lead to too much cortisol and Cushing’s disease.

Common signs include excessive water drinking and urinating.  Dogs often develop a “pot-bellied” appearance because cortisol thins the muscles of the abdomen, allowing the belly to sag, as well as increases the size of the liver.  Other common signs include hair loss (symmetrical), skin rash, darkened or thickened skin, weakness, sluggishness, and wounds that don’t heal well.

Because a series of blood samples is needed on a defined schedule (every 1-2 hours), pets usually need to stay in the veterinary hospital for the day.

Treatment is aimed at decreasing the amount of cortisol in the body.

Medications are available that destroy part of the adrenal gland (and so decrease the production of cortisol), or that counteract the hormone sent out by the pituitary gland to prevent the adrenal glands from producing too much cortisol in the first place.

Cushing’s disease can also develop in dogs that have had to be treated long-term with corticosteroid medications for other problems.

These medications act the same way that cortisol does, so their side effects include the same signs, ie, drinking a lot of water, urinating frequently, etc.  When corticosteroid medications have been given long-term, they must be discontinued gradually to give the body time to get used to properly regulating its metabolism again.  Your veterinarian will work with you on a program to gradually decrease your pet’s dosage of corticosteroid medication.

Visit WebVet for a wealth of information about the health and well-being of pets. All medical-related content on WebVet has been veterinarian approved to ensure its timeliness and accuracy.