Our Example Of The Use Of "Look At That" (LAT)

September 28, 2014
It took me a while to come up with the idea and it was amazing how quickly it worked.

We were watching a movie at a friend's house. We've been there countless times before. He has couple plants hanging in front of the window. He also has a ceiling fan which is typically on. The plants swing and turn a little in the breeze. This all has been there all along too. 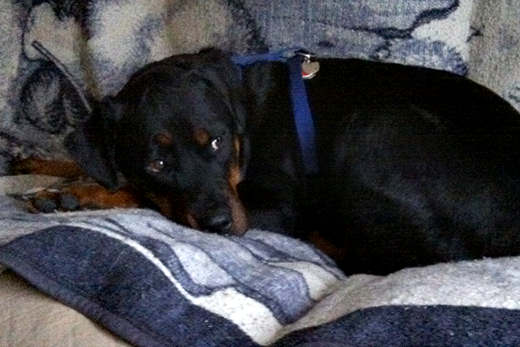 That night, though, Cookie decided she was going to take objection with that oddly behaving plant.

She'd lay there and softly growl at it. For quite a while.

We figured she'd get bored of that and stop but we were wrong. Instead, she decided to get up and give it heck up close. We couldn't convince her that it was just a plant moving in the breeze.

To help out, the friend took down the plant and brought it into another room. Yep, I was still clueless as what to do about this.

Do you think that removing the plant helped?

Nope. There was still the other one, previously ignored, now getting its turn being growled and barked at.

Then it finally dawned on me (about an hour into all the growling).

"I'm going to try something," I declared and went to grab some treats. I was going to try the Look At That (LAT) and see what happens. We already did work on it and used it during the reactive dog class.

I took her under the plant, moved it a little and asked her to Look At That. When she did, quietly, I marked and rewarded. We did that a few times.

And that was it.

Just like that the plant stopped being a problem. We hung the other one back and it was no problem either. I didn't expect it to work THAT FAST but it did.

I just couldn't believe why it took me so long to try it.

Related articles:
From The End Of A Lead Line To Casa Jasmine: Meet Cookie, Our New Adoptee
Creative Solutions And An Incidental Product Review
Taming Of The Wild Beast: Cookie's Transition To Civilization
Staying On Top Of The Ears: Cookie Is Not Impressed
Who's Training Whom? Stick And Treat
Observation Skills Of Dogs
If You Want Your Dog To Do Something, Teach It
Tricks? It's Not Just About The Tricks
What Constitutes The Perfect Dog?
Are Dog Training Classes Really For The Dogs?
Look Where You Want To Go: Finding My Reactive Dog Training Zen Zone?
Dog Training And Emotions
Dog Training And Emotions: Postscript
Dogs Love Sentences In Question Form?
Not All Dog Trainers Were Created Equal Either
A Thought On Separation Anxiety
Happy One-Year Adoptoversary, Cookie!
About Freedom, Trust And Responsibility: A "Pilot Study"
So, We Have A Bear
About Happiness: What Makes Your Dog Happy?