A Thought On Separation Anxiety

August 10, 2014
The guys did really well with all that went on while we were moving out of the old place. All the changes, boxes, piles of stuff, and disappearing stuff, didn't bother them at all. We made sure that the doggy beds stayed to the very last moment. 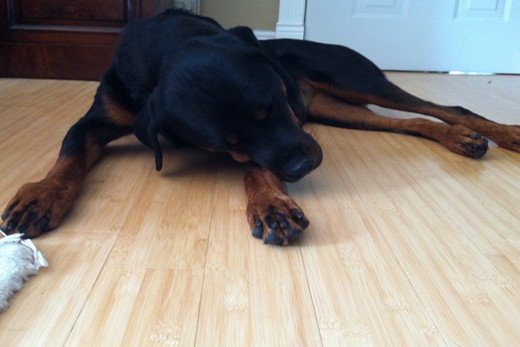 The only part they found stressful were people going in and out and they couldn't follow.

Unfortunately, that couldn't really had been helped.

One item Cookie objected being moved out was her bed. She followed along, sniffing it and looking at me as if saying, "Hey, where you're going with that? That's my bed. You're not gonna get rid of me next, are you?"

It was a rough day on everybody and we didn't get out of there before 3am.

While Jerry is hauling trailer loads of stuff up to the ranch, we are staying at friends' horse farm. The very same one the guys got to spend most of their weekends at. That has been the best place for them to drain all the stress. It is their happy place. 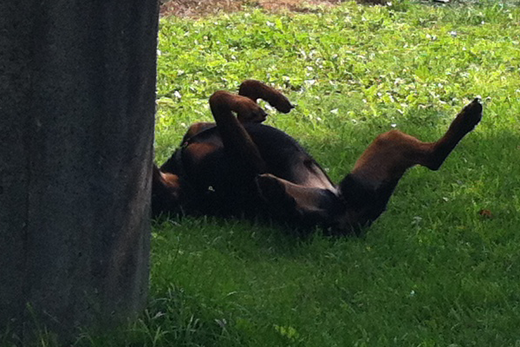 They've never really been in the house so they found that part a bit strange. However, once I moved in some of their bedding, they became comfortable very quickly.

At times they need to stay in on their own but they already consider this their new home.

In the evening, they'll go to the door on their own to get some dinner and needed rest. It is hard on a dog to run around the place all day, following everybody around, making sure nobody gets lost, and to keep all the squirrels and chipmunks at bay.

Just now, because it started raining heavily (that's why I'm sitting here writing), Cookie came to the door, "Hey, it's raining quite hard, shouldn't we go inside?"

Cookie has never been left alone for more than five minutes at a time yet, until now.

Generally, she'd get t upset when people went somewhere. Question was, though, whether she was upset because somebody left or because she didn't get to come along and was missing out on something. I have the feeling that she didn't want to miss out on any potential fun.

Either way, though, I can tell you that when a dog is tired enough, they simply don't care.

At least Cookie does not. She's just happy that she gets to rest for a while. "You're going somewhere again? As long as I can just finally rest up for a bit for goodness sake...  So while we worried about how we were going to introduce Cookie to times of being left alone, this worked out naturally.

The guys couldn't be any happier here. I bet they would love to just stay here for good. Fortunately, our final destination, Jasmine's ranch, will be just as good for them. The guys are living the dream. Outside all day, with their bipeds and buddies ... Who could ask for more? 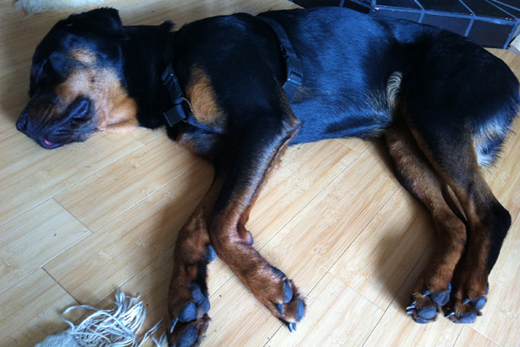 Getting a dog suffering from separation anxiety as tired as possible before leaving them alone is one of the recommended strategies. I can attest to how well it works.