June 17, 2014
It was a Sunday as any other. The guys took off with hubby to the farm. The weather was still nice and cool—a perfect day for play and frolic. 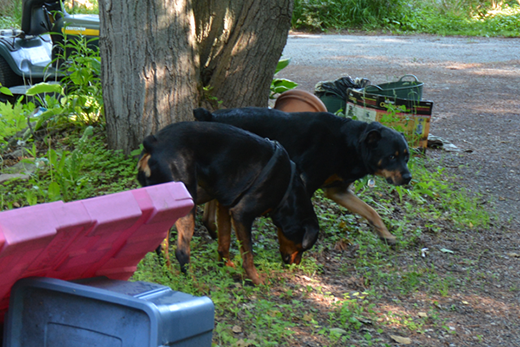 When they're gone, I always worry about Cookie getting hurt because she's such a wild thing. And she already did get hurt having a bit too much fun. JD did get sore couple times, trying to keep up with the kids but he mostly likes to stick close to daddy.

This time, they walked through the door upon return, hubby says, "JD really hurt himself today."

And the I got to see it for myself. JD was favoring his hind left leg heavily, barely touching the floor with it.

Since he was putting SOME weight on it from time to time, we figured it wouldn't be broken. It did look like he has busted his cruciate ligament, though.

Apparently it happened right during the morning walk. The dogs were running and playing as usually. There is a flight of concrete stairs going into the house, which the dogs normally don't get on, unless there is a good reason. The good reason seemed to be the resident farm dog finding it important to do so, with our guys in the tow. 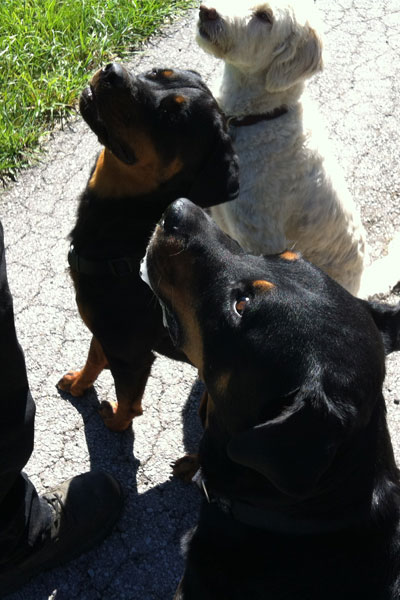 As they were running back down, right at the bottom, JD stumbled somehow and started crying.

I know you're thinking broken leg but it wasn't. Our minds kept coming back to a knee injury. Not just because it is common and because we had our share of experience with it but also because of the way he was carrying the leg.

So it happened we already had a vet appointment for Monday morning, even though for different reasons.

Both Cookie and JD were supposed to go in but we decided that it will be just JD this time.

It was going to be a long wait till Monday morning.

We talked about what would be the best thing to do if he indeed did bust his knee.

JD was quite sore. When he was laying down he was comfortable enough but when he was getting up he whimpered almost every time.

Then I saw something that made me wonder about the busted knee theory.

He was laying down. Almost all the way on the ground, he still whimpered a little bit. It didn't make sense to me how the knee could have been involved in that pain response.

A little over a month ago he came home sore on that leg. That was the first time the primary vet got concerned about JD's hip. So it happened, though, that in the evening of that day, Cookie had her chiropractic appointment. As the vet was here, we asked her to check JD out as well. She said her pelvis was messed up. She adjusted that and JD's leg seemed to get back to normal.

Somehow I felt that it might not be the knee after all. I also remembered that one time, with no more knee ligaments to bust, Jasmine came home from the farm completely lame on her rear leg as well. She didn't use that leg at all. When we took her to her chiropractor, she also messed up her alignment. It took one adjustment and she was fine the next day.

Finally Monday morning came and hubby and JD took of to the vet.

As a due diligence, and to avoid any delays, we fasted JD in case he needed to be put under for diagnostics.

The exam revealed that JD's left hip joint was completely resisting movement. It was off for x-rays. 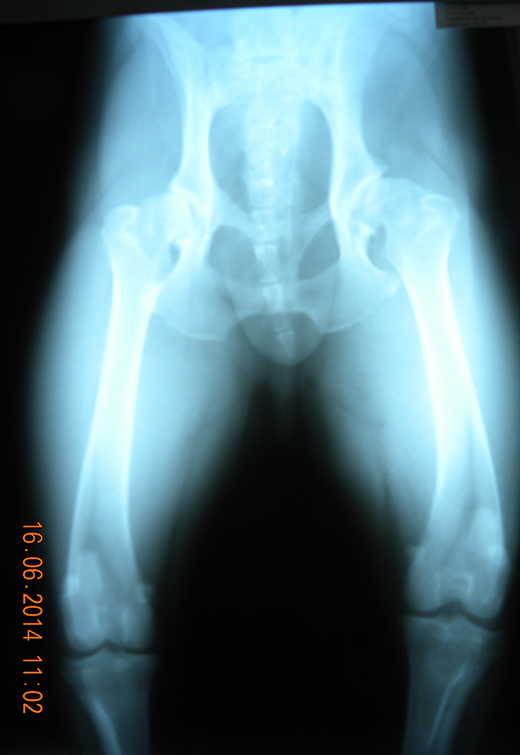 The x-rays revealed hip dysplasia and arthritis, particularly on the left leg.

There is also some muscle shortening on the left side. JD was put on Meloxicam and Gabapentin. The main words that stuck to hubby's mind were total hip replacement as a recommended treatment option.

Related articles:
Grocery Bag Is Not An Open Buffet: What Was In JD's Vomit
JD's Turn To Be Lame And The Difference In Personalities
Judging A Mouth By Its Cover: There Is More To Dental Health Than Meets The Eye