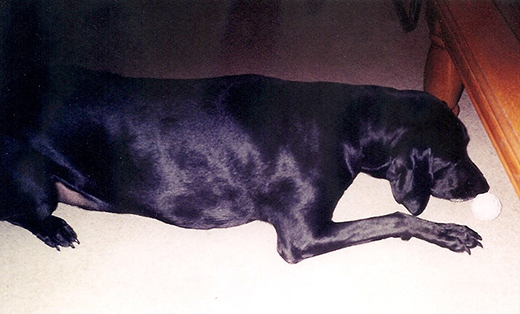 Shadow was a healthy active 5 year old Labrador Retriever. He found his forever home with my family in the fall of 2003 at the age of 4.

Shadow had little to no medical history, so we never suspected that he was suffering in silence.

In retrospect, small skin reactions under his thick black coat more than likely went unnoticed for much of his life. It wasn’t until the following spring that Shadow’s struggle with allergies was brought to our attention.

There he was: hiding behind the living room couch, face swollen and struggling to catch his breath.

We could tell he was having a reaction to something...but what?

Our vet, Dr. Bailey, dosed him with some powerful antihistamines to reduce the swelling and suppress his immune system’s natural response to whatever was triggering the reaction. The severe reaction and rapid swelling around his right eye and snout had caused the hair surrounding the affected areas to fall out. The skin became scaly, dry and cracked, requiring a two week treatment of Cephalexin to prevent infection in the damaged soft tissue. 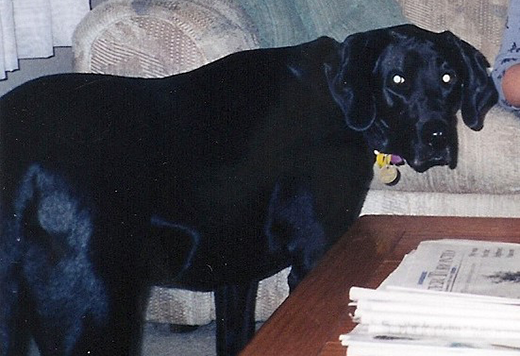 Unfortunately, after blood tests and a skin biopsy, we went home with a temporary solution and no real answers.

Because we still didn’t know the cause, Shadow was quarantined, much to his dismay, to the living room and a dog run in the back yard until we could find some answers.

Throughout his recovery and antibiotic treatment, Shadow showed no more signs of reaction or illness.

We were hopeful that the worst was behind us. Surely the reaction was to a bug bite or some food or garbage that he wasn’t supposed to eat?

Though that was the worst reaction Shadow ever experienced throughout his life, the struggle was not quite over. For the next two months we dealt with minor and moderate skin reactions, seemingly random and impossible to trace back to one thing or place.

By mid-summer Shadow began to develop what looked like ringworm on his chest belly and groin area, though no treatments seemed to even make a dent.

It got worse and soon Shadow was licking himself so raw that he had to be coned whenever he was unsupervised.

At our wits’ end, we brought Shadow back to Dr. Bailey for the fourth time that month, desperate for some answers. Finally after some extensive allergy testing, it was determined that Shadow was suffering from Hay Fever.

HAY FEVER!!! It was the last thing that either we or the vet suspected based on the symptoms. 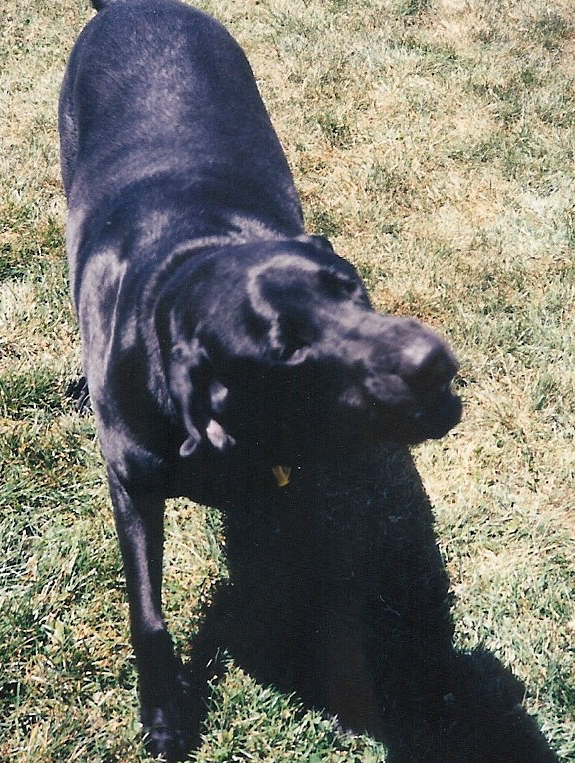 Shadow was prescribed Prednisone throughout the hay fever season and we slowly weaned him off of the Prednisone, allowing his body to become healthy enough to appropriately react to seasonal pollens and spores. We used salmon oil and coconut oil to manage his inflammation and promote a healthy immune response.

I never felt so helpless as when my pet, my friend, was suffering and there was nothing I could do to fix it.

Our responsibility as pet owners is to provide a good quality of life for the short time they are with us. Sadly Shadow’s time has passed, but he lived his last 6 years happy, healthy, and allergy free.

Please be diligent when examining your dogs.

Check for anything unusual and consult your vet if your not sure what the right treatment method is. Environmental allergies can be not only a nuisance, but potentially life threatening if left untreated or undiagnosed. Although not as commonly diagnosed as food allergies, environmental triggers should always be considered when assessing potential skin or respiratory reactions.

Krystn Janisse is passionate about pets. She has been working in the pet biz for 7 years, and started working at Homes Alive Pet Centre 3 years ago. Krystn has had pets for as long as she can remember: dogs, cats, mice, rats, lizards, amphibians, insects, and fish. Currently her pet family includes a goofy 2 year old Rotti/Shepard cross named Audrey, an over-active 6 month old kitten named Panda, a big fat 7 year old bearded dragon name Penny, a cantankerous Betta fish named Danish, and a community fresh water aquarium (too many to name).