Symptoms To Watch For In Your Dog: Nose Bleeds (Epistaxis)

April 10, 2014
I already emphasized how important it is to take your dog’s nose bleeds seriously in Bella’s story. I am talking about bleeds directly from the inside of the nose, not surface bleeds where you might be able to actually find the wound and determine the cause quite easily.

Because of their anatomy, dogs don’t get nose bleeds with every little bump to the nose as people do. 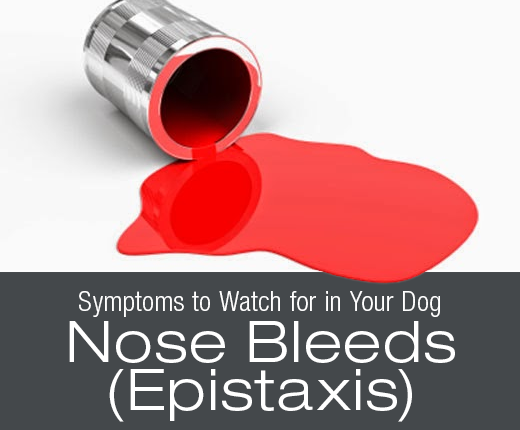 Nose bleeds are upsetting and messy and hardly escape attention. Particularly since dogs often also start sneezing as a result of blood in their nostrils. If the bleeding isn’t stopping on its own, you will quite likely rush your dog to the vet.

When it does stop, though, should you still go to see your veterinarian?

If it was just one little bleed and it stopped on its own, no, I would not rush my dog to the vet.

Jasmine had a little nose bleed once. Very little blood and it stopped quickly. She was fine otherwise. It WAS possible that her nose bleed was from a nose-to-nose impact with JD when they both tried to grab a toy at the same time.

I did not rush to the vet but I did bring it up during her next appointment. Nothing wrong was found and her nose never bled again.

But what if the nose keeps bleeding, or it happens more than once?

With a serious trauma, there will usually be other signs, such as evidence of physical injury or neurological damage. Signs of a serious problem could be as subtle as pupils that don’t react to light properly or as serious as balance issues, seizures or loss of consciousness. Does your dog look and act normal? Are both pupils the same size? Do they shrink when you direct a flashlight towards them?

Does one nostril seem congested? Some foreign bodies in the nasal passage can be quite dangerous, such as foxtails. Not only do foxtails cause a local problem but they can enter through the nose, ears, paws or skin, travel through the body and make their way into internal organs.

A dog with a foreign body in his nose is also likely to sneeze violently, shake their head or show other signs of distress and discomfort.

Foreign bodies can also become lodged in the lungs or airways leading to them and result in blood that may drain from the nose.

Many rodenticides are anticoagulants, which means they adversely affect the ability of blood to clot. Your dog might also vomit blood or bleed from the gums or rectum. This can be accompanied by internal bleeding. Besides a nose bleed, your dog could also be weak and unstable, have difficulty breathing, have bruising under the skin or swelling of the abdomen. Their gums might be pale.

Some medications can increase the risk of bleeding, such as some antibiotics, chemotherapy drugs and aspirin. Aspirin acts as a blood thinner and reduces clotting capability.

Some fungal organisms and bacterial infections can also result in nose bleeds. Particularly tick-borne diseases such as Rocky Mountain spotted fever or Ehrlichia.

Ehrlichia causes a reduced platelet count (cells that help the blood to clot), resulting in nose bleeds or other abnormal bleeding. With Rocky Mountain spotted fever, the bacteria can also infect and damage the lining of blood vessels.

Dogs suffering from a clotting disorder can have prolonged or excessive bleeding after injury, blood in urine or stool, skin bruising, bleeding from gums and nose …

Spontaneous bleeding occurs in dogs with advanced liver disease or liver failure because the liver is responsible for making clotting factors.

Liver failure can have many causes; all it took for Jasmine was one event of severe drug-induced hyperthermia. Among other things, she was bruising all over, including the skin over her abdomen and tongue (those were the places where it could be seen easily).

Hypertension (high blood pressure) can also cause nosebleeds. Dogs can develop high blood pressure as a result of another disease (like kidney failure) or as a primary problem with no detectable underlying cause.

And last but unfortunately by far not least,  recurring nose bleeds can be caused by nasal tumors. In fact, nasal tumors are the most common cause of persistent nose bleeds in dogs, especially in individuals with longer than average snouts.

If your dog has recurrent nose bleeds, put cancer on top of your list of things to look for or to, hopefully, rule out.

Symptoms may include intermittent and progressively worsening nasal discharge and/or bleeding form one or both nostrils. In some cases you can see facial deformity. Neurological signs might be present if the tumor is invading the brain cavity.

But don’t panic. Some more benign causes of nose bleeds are nasal polyps or nasal mites. Nasal mites often cause irritation to the nose and a lot of sneezing or reverse sneezing. Polyps are benign growths but can affect a dog’s ability to pass air normally through the nose. The good news is both of these conditions can be cured with appropriate therapy.

With nose bleeds, be on your toes. Do take this symptom seriously, particularly if the bleeding is severe or keeps happening.