Blog The Change For Animals: Everybody Our Own Threshold 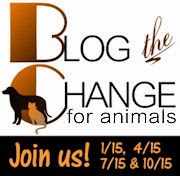 I've been thinking about a topic for Blog the Change for Animals and this is something that's been on my mind.

I feel we all might be doing too much preaching and not enough doing.

Back in my country we have a saying, "Sweep your own threshold." Stop looking at what everybody else is doing wrong, take care of your own mess first.

I know there are many people who work really hard at making the world a better place for animals.

But there is so much preaching going on.

Do the words fall on a fertile ground?

The social media is full of petitions. There seem to be as many petitions as there are people out there. We sign petitions telling other countries what they should be doing.

And yet we still euthanize dogs in our shelters, puppy mills always find a way to survive, dog fighting is alive and well, dogs get abused ...

Whatever happened to leading by example?

It kind of reminds me of the Christian church - everybody is preaching and nobody is listening. Why?

Because Christians live lives no different from anybody else. They are unhappy, greedy, selfish, adulterous ... they just dress up nice from time to time and preach.

There ARE some Christians who are different.

I remember our English instructor. He was a Canadian from Buffalo. I know ... don't ask, I don't know. He was a student and came to my old country to teach English.

He never said a word about his faith.

But he felt different. There was something about him. At first I thought it was because he was a Canadian (or American or whatnot). I couldn't figure it why it felt that way, it just did.

He didn't speak a word of Czech and felt pretty lonely. Because I spoke a little bit of English, we hung out a little. It was then, during our awkward conversation, when I found out that he was a Christian.

Was that making him different?

It wasn't my time then yet, but later on, that memory was part of what did lead me to faith. It was because he was a Christian and he WAS different.

If the world actually SAW some difference, I bet it would be willing to listen. As it stands, why should anybody be listening?

Let's give them a reason to listen.

So I'm going to shut up now and go and do something about the mess on my own threshold.