Another Belly Upset: Pancreatitis Again Or Not?

February 25, 2014
It's been about a month since Cookie's pancreatitis. We were transitioning to normal diet very carefully and she was doing great. 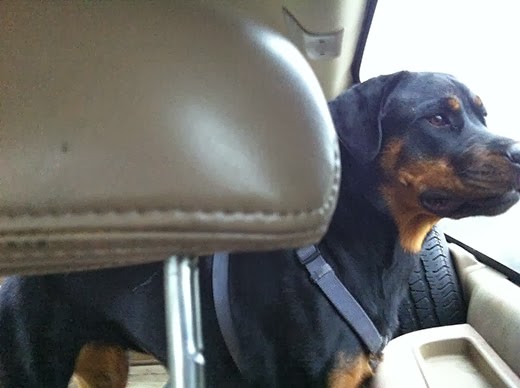 And then, last Saturday, she had another belly upset.

She spent the day at the farm, as always. Had a great time and everything was well.

When she came home, though, I knew something wasn't right just from the way she walked through the door.

Just not as bouncy as normally, going to lay down right away ... don't ask me how I see the difference, I just do. Then I offered her lunch and she didn't want it. Now I was really worried.

Hubby, of course, trying to calm me down, suggested that perhaps she was tired.

Like we didn't have the exact same conversation a month ago ... He means well and always tries to look at the bright side. Me, I'm a worrier.

I was watching Cookie as a hawk. She didn't look as bummed out as last time. She also didn't mind offering her belly for rubs. Those were positive signs.

Then she refused her dinner too, though.

Hubby asked whether we should try tempting her with something more attractive, but I wanted to listen to what she was saying. She didn't want to eat so it would probably be best to leave the belly empty. Particularly if this was another bout of pancreatitis.

After a potty break, though, she threw up.

Mostly watery, yellow-tinted, with a bit of foam. Another red flag. Were we looking at another pancreatitis event after all? If she was going to throw up again, it would had been time to take her to the emergency vet.

I found out that onset of pancreatitis can happen anywhere 2 to 36 hours from the trigger. That didn't give us much to go on. Unlike the last time, there wasn't anything we were aware of that we could point at as a culprit. Other than some stress she went through in the morning.

Apparently, stress can play a role.

It was after the thaw and freezing rain. Hubby was going to take them to the farm but it looked like there might be a bunch of ice on the way to the truck.

The idea was that he would take JD first, check it out and sand what needs to be sanded and then come back for Cookie. Cookie, however, knew it was a farm trip day. And the guys left without her! She was VERY upset. Even though hubby came back for her as soon as he could, she was quite inconsolable until then. Could that have done it?

We decided to give her one Zantac to see whether it might do any good.

She went to sleep and slept through the night. There was no further vomiting and no diarrhea.

In the morning she woke up bright-eyed, bushy tailed and hungry.

Technically, she should have been off food because she threw up the night before. As I was watching her, though, I gave it a lot of thought and decided to go with what she was telling me once again and gave her a little breakfast.

And just like that, from the morning on, everything was fine again.

Could it have been pancreatitis that resolved so quickly? I wasn't feeling it and when I got hold of our vet, he didn't seem to think so either. Something else then ... but what?

When Cookie did go potty, stool was also perfectly normal too. Yay.

Was this all just some kind of a "blip?"

The fact is, that if it wasn't for the pancreatitis she had a month ago, I would have been confident believing it WAS just some kind of a "blip." Major events do change the way one views things.

There are some theories on the table, but for now we decided to "watch and wait."

Some time soon we are going to run the blood work again and are getting a TCVM consult on Friday.

Perhaps, hopefully, this was just a one-time chance event. Perhaps from the stress, perhaps from eating too much snow ...

We're being very careful with her and watching for anything out of the ordinary.

From The End Of A Lead Line To Casa Jasmine: Meet Cookie, Our New Adoptee
And So It Begins Again(?) Our First Health-Related Heart Attack With Cookie
I Didn't Know I Could Fly: Why Cookie Wears A Harness Instead Of A Collar
C.E.T. Oral Hygiene Chews For Dogs CAN Be A Choking Hazzard
Our First Health-Related Heart Attack With Cookie: The Knee Or The Foot?
Creative Solutions And An Incidental Product Review
Too Young For Pot: Cookie's Snack With A Side Of Hydrogen Peroxide
Taming Of The Wild Beast: Cookie's Transition To Civilization
Staying On Top Of The Ears: Cookie Is Not Impressed
Putting The Easy Back Into Walking
Cookie's Ears Are Still Not Happy
The Threat Of The Bulge Is Always Lurking
Today Is Cookie's Three-Months Adoptoversary
Cookie Meets The Electric Horse Fence And Her First Chiropractic Adjustment
Why Examine Your Dog's Vomit?
Why Is That Leg Still Not Happy? Cookie's Leg Keeps Getting Sore
Cookie Too Is Insured With Trupanion
Does Being Insured Mean Being Covered? Our First Claim With Trupanion
Is Cookie's Leg Finally Getting Better?
Is Cookie Going To Be Another Medical Challenge Or Are We Looking To Closely?
The Project That Is Cookie: Pancreatitis Up Close And Personal
Pancreatitis: Cookie’s Blood Work