What Is Troubling Sandy? Did You Experience This With Your Dog? 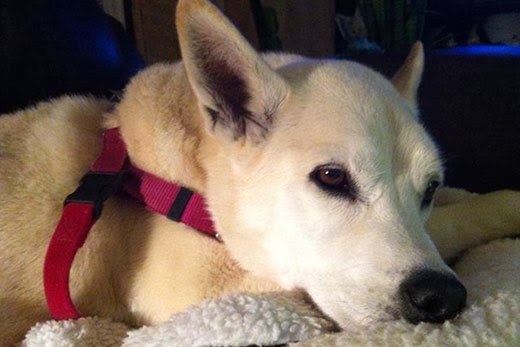 She's a Lab mix and weighs 50 lbs. Spayed at 6 months of age, has had incontinence all her life, many allergies; intollerances to food, environment, seasonal etc. Otherwise, Sandy has always been a healthy, happy, outgoing girl, fun, active, energetic and loving.

In Feb/March 2013 she started to tuck her tail and my male dog, Toby, became very interested in her scent.

He kept trying to hump her and he had never done that before (he knows better because Sandy is the boss but he couldn't help himself due to her scent).

Sandy was diagnosed with a UTI and put on antibiotics. We did another urinalysis 5 days after finishing the antibiotics and it showed the UTI was gone.

But Sandy was still tucking her tail, still had a mucous discharge and Toby still wanted to hump her.

Since then, Sandy has only declined. I have a video of her in March, being her silly self, running around with Toby and having fun. That's now a rare occurence.

Since the first UTI, Sandy has had a few more as well as major irritation in her vagina (internally, externally she looks fine), a mucous discharge that comes and goes, etc.

She did have a lot of muscular/joint pain back March/April as well but with cold laser therapy, acupuncture and pain med her pain was under control after a few months.

The major discomfort in her vaginal area persisted, though.

Sandy has had her anus examined and there's nothing in there causing discomfort. She got endoscopy of her vagina which didn't reveal anything either, other than the anatomical reason for her incontinence, which is an extra "room" in there where urine pools. But she's had that all her life.

Sandy also has had full x-rays (chest, abdominal, hips) which didn't show anything, then a full abdominal ultrasound. Everything looks good, aside from sludge in her gallbladder. No uterine stump, bladder, kidneys and liver all appear healthy.

Sandy had a vaginal smear which we thought for sure was going to give us results because the swab came out very discolored and brownish. But nothing grew in culture.

She's had bloodwork done a few times this year and it's good except somewhat elevated liver enzymes. That could be due to the gallbladder sludge. One of the blood test showed  mild anemia but when we rested it a few weeks later it has normalized.

So, here we are, after spending so much money on all these tests, and still no answers.

We're still thinking vaginitis because of her discomfort in that area but if that's what it is we don't know what to do to help her.

When she has major discomfort, she walks like a crab.

I say that because her back end is partially lowered as if she's going to scoot but she doesn't. She does this uncomfortable crab walk and it can take several minutes to go away.

If I touch her in that area when she's doing that, she drops her hind end right to the ground and is sitting directly on her butt/vulva. Sometimes she will scoot like that as well.

She has no more interest in toys or playing and it's very seldom I can get her to play. My Mom says she has a blank stare at times. Sometimes, if I don't let her go to the foyer or outside, she'll just pace, pant and won't lay down until she gets "away". Then she lays down and settles.

She loves her treats and she loves going for walks on the trails. She will run with Toby as much as she can. When I get home from work she's excited and runs around the yard with me and sometimes will chase a ball at that time too. Other than that, though, she goes back into her shell.

When she's walking, Sandy kind of exaggerates placing her front paws and is heavier on them. She has always scuffed her back feet a bit but she does that more now. After a walk down the trails, the top of her back feet are definitely dirty but her front feet aren't.

She doesn't lift her back feet up quite high enough & scuffs them (she always has done that but she does it more now) and I guess she might knuckle a bit and that's why the tops get dirty. But she corrects herself quickly. The way she walks with her front paws at times, like yesterday, is worrisome.

One thing that comes to mind as a potential suspect, as it's been new during all this since Feb/March, are Cartrophen injections.

Is it possible that Sandy is reacting to them?

Her incontinence was really bad the following day, the second day she had major discomfort, was doing her crab walk which she hadn't done in quite a while. She also got that blank stare and walking with most of her weight on the front end. 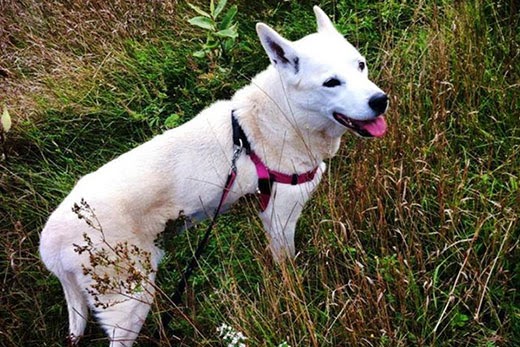 What role could the Catrophen injections be playing in the situation?

For the past month Sandy has been on DES in case her vaginal issue is hormone related.

She's also been on PPA pretty much her whole life for her incontinence. Since being on the DES her mucous discharge has almost cleared except after this last Cartrophen injection, I noticed some mucous discharge again. This morning it had a greenish tint. Other than potentially clearing the discharge, I don't feel the DES did much else for her discomfort.

Pain meds (Tramadol and Gabapentin) didn't do anything to help her discomfort in her vaginal area either.

Her body pain is under control with the cold laser therapy and physical rehab. Although lately I haven't really been doing much physical rehab because she does not like it (even coaxing her with treats, she just has no interest in her exercises/training like she used to). She's so unhappy as it is, I don't want to make her do something she's not going to enjoy.

She still tucks her tail all the time (and it is actually tucked, not just hanging limply), other than when she's running and needs to use it for balance.

When she's sleeping she pulls it away from her body. Toby continues to obsess about her lady parts.

Something else Sandy started to do since March is teeth chattering.

She had never done that before but started to do it when I'm getting her food ready. I know some dogs do that out of excitement but it's a totally new behavior for Sandy.


Something is going on but I don't know what else to do to figure out what is going on and how to help her.