What Happens In The Dog’s Body: Xylitol Poisoning

Xylitol is a type of carbohydrate called a sugar alcohol (polyol). 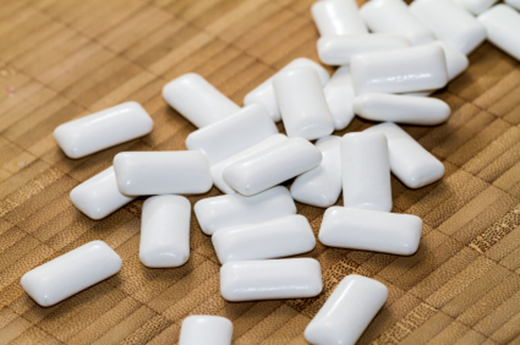 Sugar alcohols have a lower caloric density than do traditional sweeteners like table sugar, but still impart a sweet taste to foods. They also are not broken down by the bacteria found in the mouth, which makes them less likely to cause tooth decay in people.

Because of these attributes, xylitol is seemingly everywhere these days.

It is found in sugar-free gums, candy, baked goods, mouthwashes, toothpastes, gums, mints, nutritional supplements, and more. It’s no wonder that reports of xylitol poisoning in dogs are so widespread.

Why is xylitol safe for people and deadly for dogs?

When a person ingests xylitol, it is absorbed from the intestinal tract into the bloodstream rather slowly and does not have a significant impact on insulin or blood sugar levels.

The situation is very different in dogs. Xylitol is rapidly absorbed from a dog’s intestinal tract, causing its level in the blood to spike. The pancreas responds and secretes a massive amount of insulin, which causes the dog’s blood sugar levels to plummet to potentially life threatening levels. As little as 0.1 grams of xylitol per kilogram body weight (which can equate to one or two pieces xylitol-containing gum) is enough to be fatal in some dogs.

As if this weren’t bad enough, exposure to just a little bit more xylitol (approximately 0.5 grams per kilogram body weight) can result in massive necrosis (death) of liver tissue, acute liver failure, and an inability of blood to clot normally.

Anecdotally, it appears that some dogs can develop liver failure after ingesting xylitol even if they did not go through an observable period of hypoglycemia. For this reason, I treat any exposure to xylitol as having the possibility of having an adverse effect on the liver.

Symptoms of xylitol poisoning in dogs

Affected individuals may be weak, lethargic and unsteady when walking, collapse, and have seizures.

Dogs that go into liver failure develop some combination of vomiting, diarrhea, abdominal pain, loss of appetite, abnormal mentation, and yellowing of the skin and mucous membranes, but these symptoms may not be evident for several days after xylitol exposure.

If you suspect that your dog may have gotten into a xylitol-containing product, head immediately to the veterinarian’s office. Blood sugar levels can head downhill so quickly that a dog who looks “all right” one minute could collapse a short time later.

Let the dog lick Karo syrup, honey, or another high sugar solution out of your hand or rub some on his gums on the way, and bring the product packaging with you if it’s available.

When you arrive at the veterinarian’s office, immediately mention that the dog may have been exposed to xylitol.

The doctor should first check the dog’s blood sugar level, normalize it if necessary, and then induce vomiting if the exposure occurred within the last couple of hours.

Activated charcoal does not bind to xylitol so it should not be used in these cases.

When they can maintain normal levels without support for 4-5 hours or so, they’re out of the woods with regards to hypoglycemia, but not for liver failure.

I put these patients on nutritional supplements (e.g., s-adenosylmethionine) that support the liver, recheck their liver values every day for at least three days, and keep my fingers crossed.

Dr. Coates has recently joined the PetMD team and she is now writing for the Fully Vetted column; great blog, do check it out.

Jennifer also writes short stories that focus on the strength and importance of the human-animal bond and freelance articles relating to a variety of animal care and veterinary topics.  Dr. Coates lives in Fort Collins, Colorado with her husband, daughter, and pets.

Related articles:
Keep Chewing Gum Away From Your Dog!
Xylitol And The Basset Hound
What Is Xylitol Poisoning in Dogs? Ask Boomer!
Xylitol In Dog Plaque-Reducing Products?