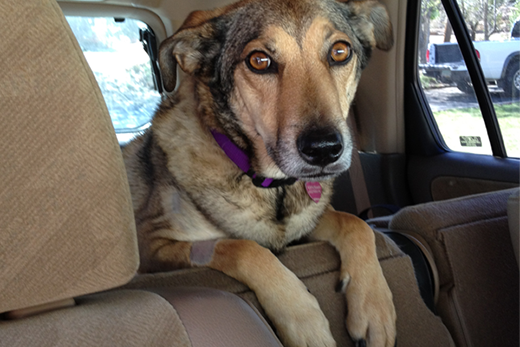 Whitney was a small German Shepherd mix, rescue. She was diagnosed back in February 2013, just 5 days after we had to put our 13 year old boy, Ziggy down due to cancer.

Whitney showed signs of tiredness and loss of appetite which we first though was depression from missing our dog who was no longer with us.

She was put on prednisone, cyclosporine and maybe a few others but continued to slowly get worse.

By late February she received her first blood transfusion after a Packed Cell Volume (PCV) of 11. She was put on azithromycin and, on my birthday, we woke up to find her lying on the floor unable to move or even pick her own head up.

She had been acting strange the day before, but it was a Sunday so I chose to wait until Monday before getting her medical attention.

We rushed her to the emergency vet at 4:30 a.m. and learned she had liver septicemia from all the meds with a fever of 105.

She received IV fluids, antibiotics, and was taken off the azithromycin immediately and was switched to mycophenylate (an immunosuppressant more forgiving for the liver).

We never had any further problems with her liver after that and she recovered well.

Over the next months her PCV increased to as high as 30, but eventually started to decline as low as the low 20's. 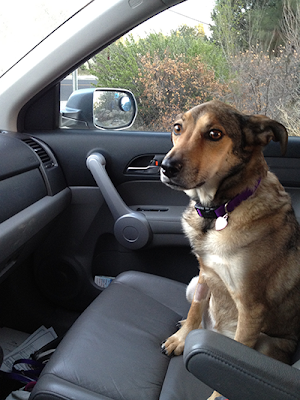 Her cyclosporine was increased after that and slowly her PCV started to increase, but she started getting a lot of infections due to how immuno-suppressed she was.

She had some skin infections but the worst was two severe bladder infections just over the last few weeks of her life.

After the first bladder infection was treated she was doing better than ever.

That, unfortunately, only lasted about a week and a half during which the vet started to taper off her prednisone in attempt to get rid of some of the immuno-suppression and next we would taper the cyclosporine.

Last Saturday night, Whitney laid next to me on the couch as she always did when I watched TV but she was shivering.

Back to the vet Sunday for more antibiotics most likely because the bladder infection came back or never fully went away.

Over the next 24 hrs she was lethargic and her appetite was worsening although her fever was going down.

She was taken to emergency care where she received IV fluids, antiobiotics and pain meds due to her wimpering and crying out.

All of her bloodwork was normal (liver, kidney, and PCV had even increased).

The Dr.'s were perplexed and suspected meningitis, septicemia, and possibly an infection in her brain.

They treated  Whitney with high doses of IV antibiotics and said she would either overcome this infection or this would be the end of her fight.

My husband and I went to work this day because she was at the hospital in the care of her very favorite vet (they had become very close after so many visits and Whitney particularly enjoyed the Starbuck's breakfast sandwiches the Dr. would get and share with her anytime she saw her on the schedule:)) so we knew she was in familiar and capable hands.

I gave the vet permission to let her go (she was in very bad shape that morning) if at any time during that day she took a turn for the worse and her condition seemed hopeless.

Our main goal was to not let her suffer.

When I left work that evening I saw a text from the vet saying that Whitney had gotten worse and that my husband was on his way over.

I knew in my heart that this was the end since "worse" didn't seem possible from the condition I had left her in that morning.

My husband did not even make it there in time and after only 10 minutes of driving she had called back to say she had had to let her go.

The vet suspected a clot or a bleed to Whitney's brain.

It breaks my heart that she had even that long of a period of suffering and I know she had to be for the vet to let her go without being able to wait for us. She spared us the details but said basically that after a long period of resting peacefully on morphine Whitney awoke, was "not there" and started agonizing in pain.

When I arrived at the vet's office, my husband was sitting on a couch crying with her in his arms.

Whitney was only 2 years old and I am having a hard time without my little shadow to follow me around.

I loved spoiling her, driving her to the vet where she sat like a human in the passenger seat, giving her meds which she always thought were treats, letting her sleep between my husband and I and cuddling with her in the morning before I got out of bed.

These are two major points I would like your readers to take from Whitney's story.

None of it would bring her back, but for me my ultimate goal was to have her comfortable and to keep her with us as long as possible.

I advise getting as educated as possible about the disease once it is diagnosed and don't stop at the education of your veterinarian.

Get online and read, read, read articles and blogs and get familiar with the meds and scenarios otherwise it can be very overwhelming when you are caught in a crisis situation because you will be so clueless. This really helped us cope and I hope Whitney is in heaven with our beloved Ziggy playing and talking about how much we loved them.