Taming Of The Wild Beast: Cookie's Transition To Civilization

"A second class day outside is better than first class day in the house,"
Jasmine would say.


And I could see the difference in her too. Even when she couldn't do much but lay around, I could see that it was just much more fun outside. There are smells, and sounds ...

Of course, Jasmine also had a dry, warm cozy den where she grew up with her pack. 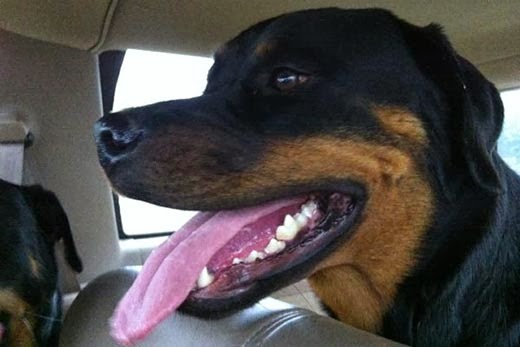 That's all she knew. Suddenly she finds herself living in a house. The rules are different. Outside, one can chew any old thing they find. They can dig anywhere they want, adjusting the ground to their liking.

Not that Cookie doesn't try. She tasted about everything that it to be found around. Including us and her brother, but he doesn't seem to mind as much as we do.

She also puts her best effort forward in order to adjust and arrange her sleeping area. Unfortunately, the bedding and mattresses don't take well to such treatment.

So how does one explain to her that things that are OK to do outside don't work so well indoors?

Funny, the list isn't really as long as it feels. I guess it's because the list doesn't include all the things I rescued by keeping an eye on her all the time.

She's never alone for more than a couple of minutes, and I do my best keeping her busy. She is VERY happy; ok, she is way too happy. 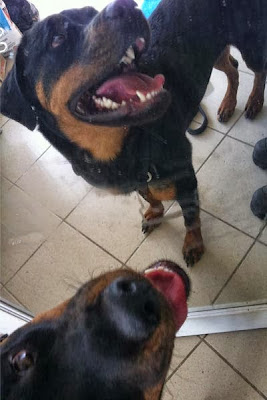 It is not because she's destructive.

She is not trying to damage anything, she is trying to fix it. Well, sometimes things just jump into her mouth too ...

I am trying to explain to her that in the house it's not the same as outdoors. The damaged things won't grow back. Of course, her English isn't sufficient for that.

Why don't I make sure she has something appropriate to chew on?

But she does. She will have a kong and play with it. And then, mischievous as they are, a blanket will jump into her mouth along with it. Or she decides that the kong is in need of being buried ...

*Yes, I can hear her trying to bury her kong in the bed while I'm writing this. Either that, or it's the playful ground scratching I've seen dogs do. The hole in the bed won't really care much why it came to be.


She'll also start grabbing whatever is in reach when she's playing, out of sheer excitement. Both her and JD decided that whey they are playing it would be too unfair and sad not to include at least one of us as well. They generally play indoor games, which mostly consist of fencing and nipping at each other. Or one of us. Or whatever else is within reach.

We can yelp. The blankets and furniture cannot. Though I did try yelping on their behalf. 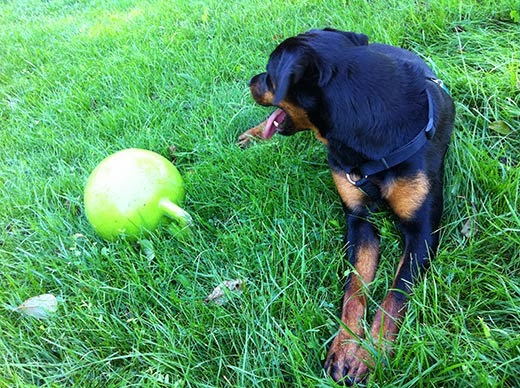 Can I get mad at her?

No, I can't really get mad at her. She doesn't understand why these things are not ok. And she's too darn cute. And too darn happy. And doesn't have a mean bone in her body.

She hardly even chews on stuff on purpose. If those things just stopped jumping into her mouth ...

The scratching is actually the biggest problem right now. Particularly since she tends to go nuts after having her ears cleaned, which we now need to do daily for the time being. (more on that later)

No, I'm not going to crate her.

She's been confined and excluded for way too long, I can't do it to her. So I have to be on my toes and watch her like a hawk while she's learning what's ok and what's not. Hopefully I can keep the body count to minimum in the meantime.

Getting her tired, of course, works. For an hour or two ...

And that's just some of the indoor challenges. But I love the little girl and that makes it easier to be patient with her. Hey, to her credit, she is clean and never soiled the house. And she is really trying to be good, you can just see it. Just not always succeeding.

Related articles:
From The End Of A Lead Line To Casa Jasmine: Meet Cookie, Our New Adoptee
And So It Begins Again(?) Our First Health-Related Heart Attack With Cookie
I Didn't Know I Could Fly: Why Cookie Wears A Harness Instead Of A Collar
C.E.T. Oral Hygiene Chews For Dogs CAN Be A Choking Hazzard
Our First Health-Related Heart Attack With Cookie: The Knee Or The Foot?
Creative Solutions And An Incidental Product Review
Too Young For Pot: Cookie's Snack With A Side Of Hydrogen Peroxide