Too Young For Pot: Cookie's Snack With A Side Of Hydrogen Peroxide

Bad luck, or medical problems, both. In the short time Cookie's been with us, she already managed to have a sore foot, tried choking on a dental chew, and snacking on potentially dangerous stuff. 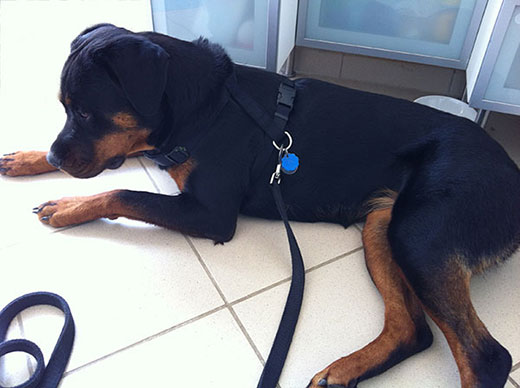 I'm being told that this is the way it goes with adopted dogs. I'm even being told that it's the sign they belong with us. I could do with a different way of knowing, but I guess it is what it is.

I'm just hoping that three will do it and perhaps that might be it for a while.

But not until we got all three.

As we were going through the parking lot, guys were sniffing as usually and then I noticed Cookie munching on something.

She doesn't know the Drop It yet, so I reached in an attempt to grab it out of her mouth. She's quite good with that, letting me do it.

As I reached it, it was soft and gooey. That's all I could tell before it made it's way down.

At first, I thought it was dog poop.

When I retrieved my hand it was not only soft and gooey but also brown. I was somewhat unimpressed by having that all over my hand and I smelled it to confirm.

It did not smell much at all, perhaps with a touch of sweetness. A brownie?

Now I wished it WAS dog poop.

Given Cookie's size, I didn't really think that could have been enough chocolate in that bit to make her seriously ill. Wanting to confirm, I contacted one of my veterinary friends.

She agreed that Cookie was not at risk of a serious chocolate poisoning. However, what she asked next was even scarier.

"Is there any chance this was a pot brownie?" she asked.

Huh. That never even crossed my mind before.

I did not know whether it could have been a pot brownie. I didn't even know for sure it was a brownie or some other type of chocolate baked product. It was made of dough and it was brown. That's all I knew for sure.

Ours is a pretty decent neighborhood, but lately, with some of the recent tenants, police would show up every now and then.

I did not think it was a pot brownie. But would I want to bet Cookie's life on it?

After some deliberation and bargaining, it was decided. Cookie has to lose the snack.

Because it was within an hourish from ingestion, inducing vomiting was our best option.

Fortunately, our doggie first aid kit does contain 3% hydrogen peroxide. For Cookie's size, the dose was 2 tbsp and 1 tsp.

So we measured up the dose, grabbed a turkey baster and squirted it into unimpressed Cookie's mouth.

Then hubby walked around with her outside, hoping that this will make her throw up within 15 minutes. If not, she would have to enjoy the experience one more time.

About eight minutes later hubby came back with Cookie.

She had thrown up and whatever might have been in her belly was now out.

After that, Cookie had to remain without any food or water for about an hour and given only small amounts of water and half of dinner later.

She had no ill effects from the adventure and all was well.

Being the third incident, hopefully, that also concludes our series of health-related excitement for a while.

From The End Of A Lead Line To Casa Jasmine: Meet Cookie, Our New Adoptee
And So It Begins Again(?) Our First Health-Related Heart Attack With Cookie
I Didn't Know I Could Fly: Why Cookie Wears A Harness Instead Of A Collar
C.E.T. Oral Hygiene Chews For Dogs CAN Be A Choking Hazzard
Our First Health-Related Heart Attack With Cookie: The Knee Or The Foot?
Creative Solutions And An Incidental Product Review