Our First Health-Related Heart Attack With Cookie: The Knee Or The Foot?

When Cookie suddenly went fully lame on her rear left leg, we were really worried she might have busted her knee ligament. It certainly did look like it. There were couple things about it that kept us somewhat hopeful that it could be the foot instead. We cut our trip short and returned home, where we were better equipped to deal with a lame dog. 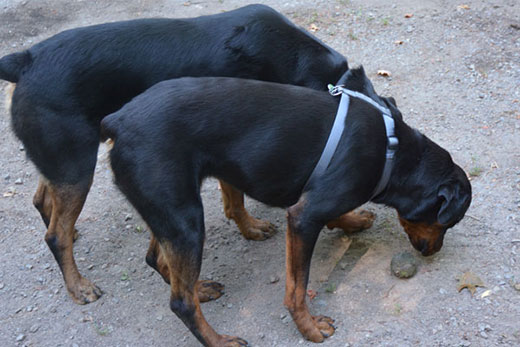 The lameness persisted to the next day.

At least by then Cookie started getting used to having only three legs to use because at first she seemed quite lost as to how to move about with one leg out of commission.

We decided to take her to a local vet in order to make things easier on Cookie.

The vet examined her leg up and down, really feeling everything and playing with the knee.

She did not elicit a drawers sign or any other indication of a problem with the knee.

Cookie's foot was somewhat swollen and the vet got pain response when playing with the toes. The conclusion was that the leg is fine and the problem is with the foot. That was a huge relief to us.

Cookie came home with Deramaxx and instructions that if the signs didn't improve by the end of the week, they will need to surgically look for a foreign body in the foot.

We were still hoping that it might have been a sting. Other than the lameness and general swelling there was nothing that would look like an entry wound.

Cookie had to mostly rest, with just short potty walks.

The next day she started walking normally on that foot, so we took her for a short walk as well. Things were looking good and we hoped that this might have been the end of it.

Since she was walking well, and really needed some exercise an entertainment, the next day we took her to the horse farm. 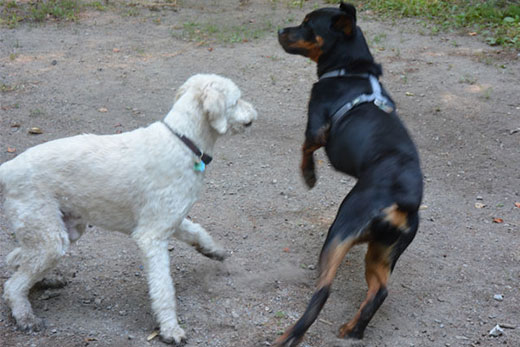 It was her first time there and you can imagine how excited she was. Playing with JD, running around, couldn't settle down for a moment. She had a great time.

And then she went lame again.

This time the foot looked very angry, with a lump that looked like an abscess now, and overall unhappy tissue. We called our vet whether he could see us that day and went from the farm straight to his office.

The toes were indeed very unhappy and sore. He squeezed bunch of pus and Cookie limped out with a poultice bandage and antibiotics.

We had a follow up appointment in two days to see whether or not an exploratory surgery was needed to find and remove the now likely foreign body.

The instructions were to keep the bandage dry. Fortunately, Cookie did not need the horrible cone of shame, because the bandage was a "no chew" product, in fact, had it written all over it.

"So she shouldn't lick or chew this?" asked hubby.
"If she reads it," replied the vet.

I guess Cookie did read it, because she left it alone.

Two days of restricted activity and limping around later, the poultice came off. The foot looked much happier and it seemed that surgery was not warranted.

We were to do soaks in Epsom salt and keep and eye on it.

Cookie was walking normally but the foot didn't look to me the way I'd expected it to look--getting better. I kept looking kind of the same, still draining with a bump that almost looked like an interdigital cyst now.

So back to the vet.

He wasn't happy with it either. Gave it a good squeeze and a bunch of pus and dead tissue came out. And then a tip of something became visible.

It was a porcupine quill.

Technically, Cookie should have been put under for that but because she's been very good about it, the vet was able to pull it out right there on the exam table.

It was quite a good chunk but the without the tip.

The tip may or may not have remained in there. If after this the foot didn't get better, surgery to find and remove it would be needed.

However, after this, the foot seemed to have been healing quickly and by next appointment it looked 90% healed.

We were so happy that our footsie trouble were over.

When we got Cookie we were told that she had couple encounters with a porcupine. Perhaps the piece of quill ended up in the foot as she was trying to paw them off her face. Perhaps she stepped on a quill fragment. Either way, the vet felt the toes very thoroughly and there was no indication that something should have been left in there.

We just went for a local walk for a couple days and on the weekend things looked good enough for us to decide to take Cookie to the farm again.

Cookie had a great time. But when we returned home, the lameness returned and she wouldn't put any weight on the foot again.

The swelling and oozing was back. The footsie saga doesn't seem to be over after all ...

From The End Of A Lead Line To Casa Jasmine: Meet Cookie, Our New Adoptee
And So It Begins Again(?) Our First Health-Related Heart Attack With Cookie
I Didn't Know I Could Fly: Why Cookie Wears A Harness Instead Of A Collar
C.E.T. Oral Hygiene Chews For Dogs CAN Be A Choking Hazzard
dog conditions