JD's Turn To Be Lame And The Difference In Personalities

September 24, 2013
When I called for a vet appointment for JD's hind left leg lameness, the receptionist jokingly asked, whether JD was having sympathy pains. 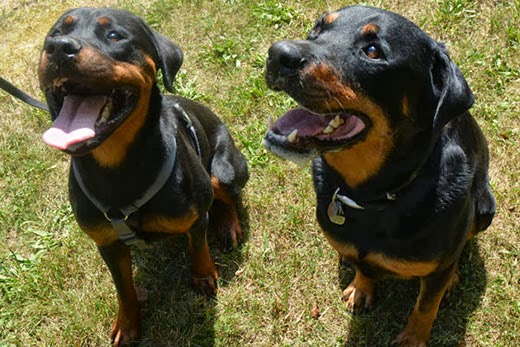 Cookie's footsie saga continued into the last week, when, after presumed all healed up, it started acting up again and draining. She was put on one last course of antibiotics to see whether that will do. Otherwise, we do need to go digging for the rest of the porcupine quill.

Meanwhile, JD figured he should get his turn.

While limping on the same one, no, he wasn't having sympathy pains, he had his own sore leg.

It all happened at the farm.

They have a shop where hubby goes to work on his projects, as well as there is all kinds of stuff stored around. Among those, there is a steel rack; both made out of steel, as well as storing steel on it.

After couple of hours of running around with Cookie, I was sitting there with her trying to catch my breath. We typically don't watch JD much, he's been going to the farm since a pup and doesn't need much supervision. Plus, I knew he was somewhere close behind me, as I could hear his tags. 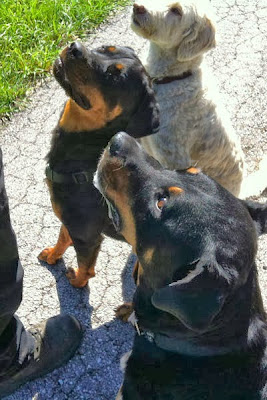 Hubby comes asking where JD was.

Somewhere right behind us, I answer. Hubby is looking, "I can't see him," he says.

"Well, I can't see him." Hubby calls his name again. JD is not coming and yet I can still hear that he is in there some place close. That was pretty strange.

Surely he didn't climb crawl something there and cannot get out now?

We called him a few more times. Nothing, just the sound of the tags. So we get on all fours, looking under the rack. And there he was and he was not coming out.

Only God knows how (and why) on Earth he made his way under there.

There isn't even enough clearance under there to actually crawl. And to make things worse, the whole rack has a steel "footer" making it even more difficult.

How do we get him out now?

We tried luring him out with treats; he kind of tried but gave up quickly. Then hubby tried to see whether he could help him out. But with the footer in the way, it was quite likely he would have to hurt him to get him out.

He'd have to try to get out of there the same way he got himself in there. But he clearly needed more motivation than being called or offered treats.

So we started slowly walking away. I didn't take long for JD to have joined us.

He made his way out.

That was a big relief. We then went for our closing walk,  as we always do before going back home. Everything seemed fine.

It wasn't until after we got back home when I noticed he wasn't putting full weight on his foot.

We checked the foot and the leg thoroughly but didn't find any cuts or scrapes. We figured he must have bumped it as he was getting in or out from under that rack.

He got a home rest the next day. There still wasn't anything visible on that leg, though he was still favoring in and licking it.

The next day he was favoring it a bit more and licking it vigorously.

Another inspection revealed a bump near the dew claw. Between the bump and worsening lameness, we made an appointment with the vet for the following day.

Turns out he must have nicked it somehow, even though we couldn't find any wounds, because it was now infected.

Fortunately, with antibiotics, he improved quite quickly.

I found it curious, that between JD's and Cookie's lameness, both from quite a similar cause, they both dealt with it quite differently.

Cookie's foot was quite infected and it had the piece of porcupine quill in it. It was painful enough that she wasn't bearing any weight on that leg at all.

And yet she was quite happy and wanting to play, hobbling on three legs only.

But it's not really a big surprise, because Cookie seems to be running on pure adrenaline. She is so excited over everything as if everyday was Christmas.

JD was still bearing some weight on that leg. And yet he was quite grumpy and guarding the leg from anybody, particularly Cookie, getting anywhere near it.

To help him out, because Cookie doesn't really know how to take no for an answer yet, I reinforced his den under hubby's desk so he'd have a safe and quiet place there. I made a fort out of hubby's chair and pulled out drawers, and wrapped it around with a blanket.

But of course, JD would decide to lay in the middle of the room instead, and then get grumpy when Cookie was pestering him to play. *sigh

Fortunately, once the antibiotics got the infection down, within couple days, he was quite willing to play again.

He has never tried getting under that rack before, not even when he was little and could have fit well enough. I hope he's learned that he doesn't fit and won't do this again. But he's a guy, they don't learn very fast.